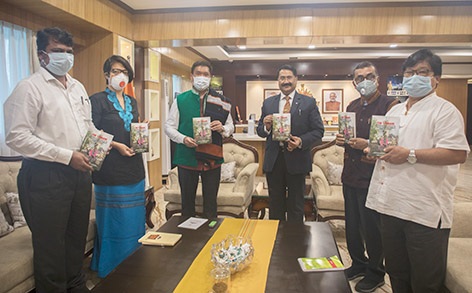 ITANAGAR, Jul 6: A book titled The Tangams: An Ethnolinguistic Study of the Critically Endangered Group of Arunachal Pradesh, published by the Centre for Endangered Languages (CFEL) of Rajiv Gandhi University’s (RGU) Arunachal Institute of Tribal Studies (AITS), was released by Chief Minister Pema Khandu here on Monday.
Published in collaboration with Himalayan Publishers, New Delhi, the book is based on the Tangams, a critically endangered speech community of Arunachal, domiciled in Kugging village in Upper Siang district.
Its coauthors are Kaling Dabi, Kombong Darang, Rejhoney Borang, Chera Devi and Rumi Deuri.
The Tangams are one of the lesser-known ethnolinguistic groups within the Adi tribe of Arunachal. According to the CFEL field survey of 2016, the total population of the Tangam community is only 253 and resides only in one village.
The outcome of the study is presented in the chapters, which contain a study on the Tangam language and intend to offer crucial insights into the language structures within the Tani group of languages.
The chapters also contain valuable primary data on endangered oral narratives like ritual songs, lamentation songs, lullaby and festival songs, and cultural practices like social life, political life, religion, and belief systems.
The book is an outcome of four years of extensive field research and documentation carried out by the research team of the CFEL in Kugging village.
Stressing on timely preservation of the mother tongues of Arunachal, the chief minister said, “Language loss is the reason for cultural erosion.”
The book-release event was attended by RGU VC, Prof Saket Kushwaha, Pro-VC, Prof Amitava Mitra, Registrar, Prof Tomo Riba, AITS Director, Prof S Simon John, Prof Jumyir Basar, and CFEL senior research fellow Kaling Dabi. (CM’s PR Cell)