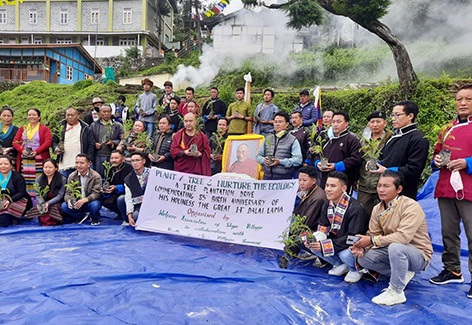 TAWANG, Jul 7: Trees were planted in different places in Tawang district to mark the 85th birthday of the 14th Dalai Lama, and the 71st Van Mahotsava.
The Welfare Association of Shyo Village in collaboration with the Tawang forest division organized a plantation programme at Shyo Middle School and planted around 200 saplings.
Dr Rikya Lhavoe Rinpoche, teachers and staff of the school, the GB, public leaders and villagers joined the plantation drive.
Around 200 saplings were also planted in the premises of the Dolma-Lhagang in Lungla as part of the celebration.
Lungla ADC RD Thungon and the CO also joined the plantation programme, besides public leaders, GB and villagers.
In Mukto village, around 250 trees were planted by the monks of Sherjong Gonpa along with the villagers and the GB. The Tawang forest division distributed 1,550 saplings to all the government schools of the district, NGOs, monasteries and defence establishments during the weeklong Van Mahotsava celebration. (DIPRO)