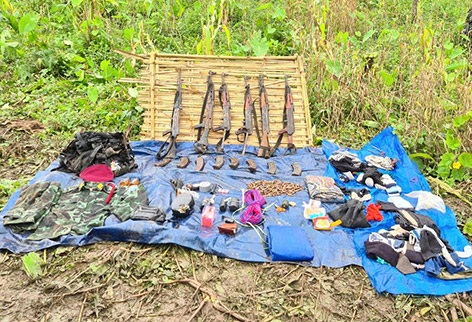 ITANAGAR, July 11: Six armed NSCN (IM) operatives were killed in a joint operation by the Indian Army, the 6 Assam Rifles (AR) and the Arunachal Pradesh Police (APP) near Nginu village in Wakka circle of Longding district on Saturday morning.
Informing about this, DGP RP Upadhyaya said one AR jawan received injuries.
Those killed are reported to be all males between the ages of 25 and 40.
Four AK rifles, two MQ-81s and nine magazines were found, along with explosives, including grenades and improvised explosive devices (IED). The operatives reportedly fired 400 rounds.
The APP said that the team that was killed had been sent by Rockwang @ Absolom Thangkul, who was involved in the murder of MLA Tirong Aboh on 21 May, 2019.
“On 10-7-2020, an input was received which was verified by different agencies, that a team led by SS captain Somnyam Tangkhul, and five other cadres are camping in general area of Nginu and they are planning to abduct Longding market president and secretary.
Accordingly, a joint operation was launched under leadership of CO 6 AR and SP Longding police.
“At about 4:30 am on 11 July, first contact was made by a team of 6 AR in jungles between Nginu and Ngissa. Later, remaining teams also moved in formation and firefight continued for about 1:30 hrs to 2 hrs,” the police said.
The 6 AR CO and the Longding SP were also present at the spot. An FIR is being registered based on a complaint lodged by the 6 AR.