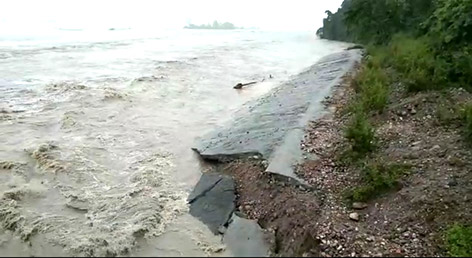 [ Karyir Riba ]
ROING, Jul 11: The Dibang bridge and Bomjir village in Lower Dibang Valley district are under constant threat due to continuous rain over the past many days.
The district recorded 487.60 mm rainfall on Friday. It is the highest rainfall recorded so far in the district. As per the water resources department’s (WRD) report, the Dibang river is flowing just .53 metres below the danger level at the bridge point.
Reportedly, the embankment and the revetment (500 mtr upstream and 175 mtr downstream) built by the construction company to protect the right bank and the bridge abutment have been completely washed away, resulting in a shift in the flow of the Dibang river towards the right bank, on which Bomjir village is located.
If the rain continues, it could lead to complete erosion of Bomjir and washing away of the bridge’s right abutment.
The WRD has expressed concern that preliminary study of the embankment and
the revetment constructed by the company has revealed that the flood data used for the design had not been updated and neither was the WRD consulted.
A detailed study as well as protection measure is needed to protect the bridge and the public assets on the right bank in Bomjir, it said.
The department has insisted that its participation be invariably included in any such vital constructions in the state.
As per the WRD report, the Eze river is flowing below the danger level. However, the DA has issued an order prohibiting the people from venturing into rivers and streams, especially the Dibang and the Eze, for any purpose.
It advised the people living along riverbanks and flood-prone areas to shift to safer places.
All the HoDs have been directed to activate their disaster response teams and keep them in readiness for any eventuality.
The people have also been advised not to undertake any unnecessary journey in view of the increased water levels in the rivers and incidences of road blockages due to landslides along the Roing-Sissiri-Pasighat route and the Roing-Hunli-Anini route.
The DFSCO has been directed to ensure that there are sufficient ration and POL stocks in the district and the circles.