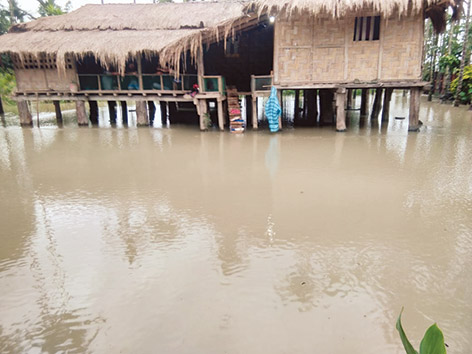 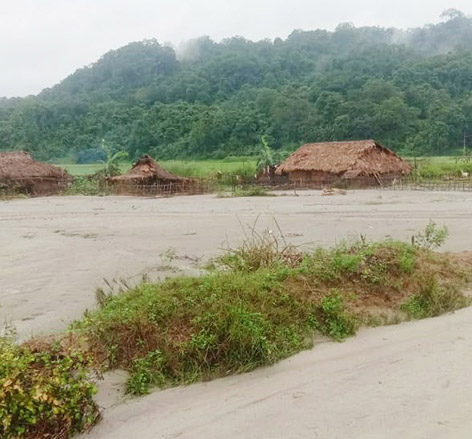 [ Pisi Zauing & Prafulla Kaman ]
DHARMAPUR/RUKSIN, Jul 11: The flood situation in the eastern part of the state continues to remain grim with vast areas of Changlang and Namsai districts still under water.
Dharmapur block in Namphai circle, Bijoypur in Bordumsa, and several other places in Diyun circle have been the worst affected by the current wave of flood. While Namsai town and Namphai-II in Miao circle are still under water, a tributary of the Noa-Dehing river passing through Dharmapur block wreaked havoc in the area. Many livestock were swept away by the river, and the hapless owners could do nothing to save their animals.
Reportedly, the flood-affected villagers are faced with lack of food, shelter, medicines and safe drinking water. Erosion is also taking place at several locations in Diyun and Miao circles. New Champoo, Phanyak, Namphai Singpho and Maithong villages in Namphai-II have also been badly affected by flood.
The tiny-looking Maithong stream transformed into a huge roaring river and swept away anything that came in its way. The flood-affected villagers of Maithong are stranded in their village for the last two days. Managing their livestock during the flood has become a Herculean task for the villagers.
The chances of outbreak of water- and vector-borne diseases cannot be ruled out in the affected areas after the flood water dries up.

Flood causes extensive damage in Nari-Seren area
Flood due to heavy rains that have been lashing the Siang region for the last one week has caused extensive damage to the rural roads, irrigation channels, crop fields and horticulture gardens.
It has also disrupted water and power supplies in Nari-Seren in Lower Siang district. While the Seren river eroded horticulture gardens on both its banks, overflowing waters of Angma and Egum nallahs devastated the irrigation channel in Angma.
“The floodwater also damaged several acres of standing crops in Seren, affecting at least 25 families,” said Ramle Banggo Students Union (RBSU) president Mirjum Karba.
A team of the RBSU, led by Karba submitted a representation to the Lower Siang DC, demanding proper assessment of the loss and damages caused by the flood in Seren area, and relief for the affected farmers.
Meanwhile, overflowing water of the Deka river toppled electric poles at Pam village, while a turbulent Ringu Nallah eroded the PMGSY road that links NH 15 to Pam village. The forest beat office in Seren is under water for the last two days.