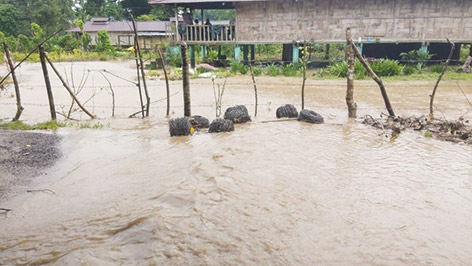 [ Karyir Riba ]
TEZU, Jul 13: Duraliang and Changliang villages in Tezu circle of Lohit district have been facing the wrath of the Duranalla, a seasonal river that flows between the two villages.
Every year, the Duranalla causes flood in the two villages and extensive damage to crops and other properties, including livestock.
Like in previous years, the overflowing water of the Duranalla flooded the villages again this year. Reportedly, floodwater entered the villages early in the morning of 11 July, creating havoc among the villagers and inundating standing crops.
A similar flood had occurred in the villages on 27 June.
Lohit DDMO Damchin Norbu confirmed the report and said his department has been taking stock of the situation.
“We have engaged men and machinery to check the flow of the river towards the village,” Norbu said.
The DDMO also informed that a scheme to build a flood protection boulder wall “has been applied to tackle the problem permanently.”
He informed that compensation for the affected families would be fixed and relief provided based on the assessment report, which is still awaited.
The residents of both the villages, however, are unhappy over the state government’s failure to take measures to protect their villages from flooding, and have demanded a permanent solution to the problem.
Reportedly, every year the villagers utilize the fund allocated under the MGNREGA to build a bund but it is not enough defence against the flow of the river water during heavy rains.
Yalum Ama, a villager from Duraliang, said they have not yet received any compensation for lost crops and livestock in the last two years, and that whatever they had received before hardly compensated for their losses.