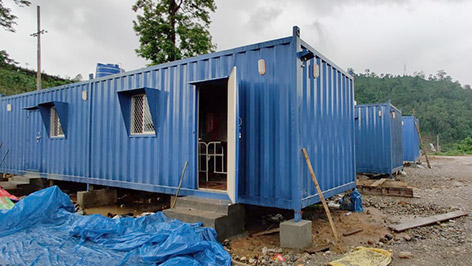 Staff Reporter
MIDPU, Jul 14: With the number of Covid-19 cases rising in the state, the focus has turned to the dedicated prefabricated Covid-19 hospital coming up here in Papum Pare district. The hospital, which was to start functioning by now, is still not ready.
Besides the delay in arrival of prefabricated cabins, which are being brought from Jamshedpur, unavailability of construction materials for additional works due to the imposition of the lockdown in the Itanagar capital region, and lack of cooperation from the locals have further delayed the work.
Altogether seven cabins will be installed to establish the 35-bedded dedicated Covid care hospital. Till now five cabins have been installed. Another cabin arrived on Tuesday, and the last one in the batch is expected to reach within a week.
Meanwhile, the people working at the hospital site informed that they are facing plenty of hostility from the locals.
“It was told to us that the whole area belongs to the health department, but the local people are erecting fences near the hospital. The people working on the site are not feeling safe,” said a worker at the site.
Also, the locals are not allowing the power department to install a transformer for the hospital.
“Till now, thrice the power department has tried to set up a transformer by clearing the area. Every time the locals come and threaten the workers. Air conditioners have been installed in the five cabins but there is no power to test them. It is very difficult to execute work in such a hostile atmosphere,” the worker added.
The work is being disturbed even though the police have posted one IRBn jawan at the site.
“There is an urgent need for intervention by the health department and the Papum Pare district administration. The land issues should be clarified, so that work is not disturbed,” the worker said.
However, Health Secretary P Parthiban claimed before the media on Tuesday that the hospital would start functioning “within the next 10 days.”