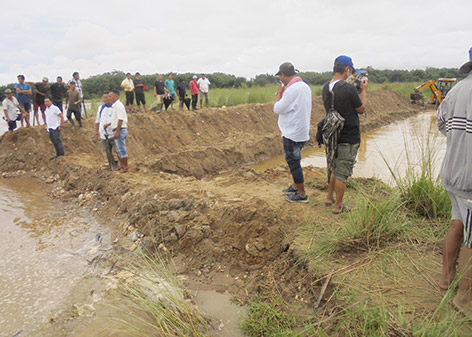 [ Prafulla Kaman ]
RUKSIN, Jul 15: The work for diversion of the Deren-Depi River course in East Siang district began on Wednesday in presence of Pasighat West MLA Ninong Ering, Ruksin ADC Tajing Jonnom and other leaders.
About 150 villagers are working at the site, while the Ruksin sub-divisional administration has managed
two earthmovers for the diversion works.
According to locals it will take three days to complete the work.
Meanwhile, ADC Jonnom has said that the administration is putting all its efforts to control the erosion posed by the river on its left bank.
The Depi-Deren River flowing along Depi-Moli and Depi villages is fast eroding the left bank and had flooded crop fields in the downstream during the last flash flood.
Erosion caused by the river is posing a threat to the village which include a church and a lower primary school at Depi-Moli, while a large portion of the community burial ground on the left bank is also eroding fast.
MLA Ninong Ering, who visited the affected sites last week, assured the villagers of helping them in mitigating the problem. He hoped that diversion of the river course will reduce flow of water at the affected site and control soil erosion.
The MLA further assured the people of taking up an anti-erosion project at Depi-Deren River in the winter season.
Among others, East Siang unit AdiSU president Kangir Jamoh, public leader Arong Perme, social worker Tabuk Panyang and others accompanied the local MLA during his visit to Depi-Moli.