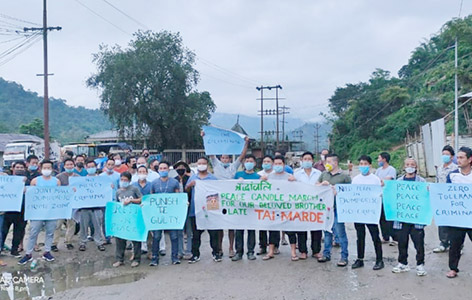 DUMPORIJO, Jul 20: The All Topo Youth Association (ATYA) on Monday took out a candlelight march here in Upper Subansiri district to protest the brutal murder of Tai Marde.
Demanding justice for the family of Marde, the ATYA appealed to the law enforcement agency to expedite the investigation and furnish the details leading to the heinous crime.
It also sought stringent punishment for the accused as per the law.
The 22-year-old was allegedly murdered by two of his friends on the night of 8 July here.
Tania Bulo and Tako Pobo were identified as being involved in the alleged murder.