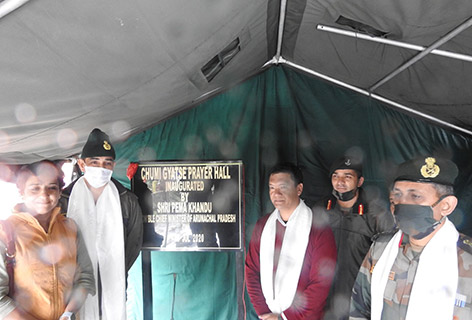 TAWANG, Jul 20: Chief Minister Pema Khandu on Monday inaugurated a prayer hall and a statue of Guru Padmasambhava in Chumi Gyatse in Tawang district.
The construction of the prayer hall began in May 2018 and was completed in June this year by the civil administration and the Indian Army.
“Along with this construction, the civil administration and Indian Army have improved the connectivity to this remote location by constructing a motorable road,” the Tezpur (Assam)-based defence PRO informed in a release.
The CM expressed hope that the revered site would boost tourism to the area, and thanked the army for its support.
The event was also attended by the MLAs of Dirang and Lumla.