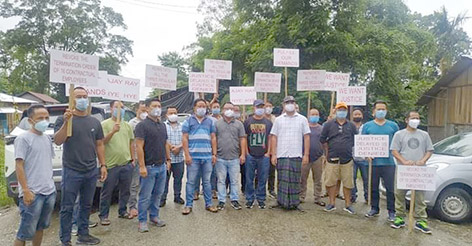 [ Pisi Zauing ]
KHARSANG, Jul 20: Local MLA and UD Minister Kamlung Mossang said Kharsang-based GeoEnpro Petroleum Ltd in Changlang district did not intimate the state government about its plan to reduce manpower.
“While providing employment to the locals, particularly from the oil operational area, is part of the corporate social responsibility, at the same time, depriving the poor workers from their job during the pandemic is a violation of the guidelines issued by the central government,” said Mossang.
He said the company will need more workforce in the next few months with the government granting extension of the petroleum mining lease along with development of new wells.
He opined that continuation of the service of the 19 workers (who have been sacked by the company) for the next few months “is not likely to put extra burden to the company’s exchequer.”
Mossang suggested to GeoEnpro and its consortium partners to make decisions “based on careful thought and good judgment,” in order to end the deadlock.
Earlier, he spoke to the GeoEnpro CEO over telephone and urged him not to terminate the poor workers from their jobs as it would cause boundless sufferings to their families.
On 9 June, GeoEnpro sacked 16 contractual employees and reportedly coerced three other employees into tendering their resignation.
Several organizations, including the Tangsa Youth Association, the Kharsang Circle Unemployed Youth Association, the All Tangsa Student’s Union and the All Changlang District Student’s Union have since been demanding that the oil extraction company reinstate all 19 employees.
They held two rounds of negotiations with the management of the company, on 6 and 13 July, but the meetings failed to yield any result.
After the deadlock, the organizations launched an indefinite strike against the company on 15 July and stopped the movement of bowsers transporting crude oil from the Kharsang oilfields to refineries in Assam.
It is also a fact that additional financial burden has been put on the management as a result of the introduction of the new policy on petroleum production by the government of India. Therefore, GeoEnpro and its consortium partners had to resort to cost-cutting through manpower reduction.