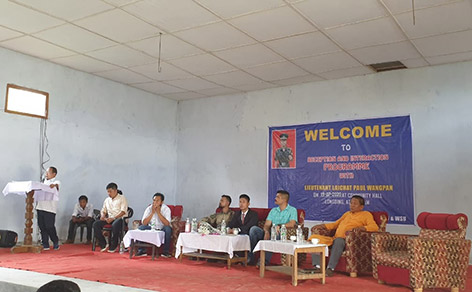 LONGDING, Jul 20: “Parents need not give too much luxury to their children early in their life. If parents give everything, there’s nothing left for the children to strive for and they end up doing nothing,” said commissioned army officer Lt Laichat Paul Wanpan, addressing an interaction programme organized by the Longding District Students’ Union here on Sunday.
Lt Wanpan is the first army officer from the Wancho community.
During the programme, he recounted the struggles and hardships he faced as he belonged to a poor family in Longphong village.
He had joined the GREF/BRO as a night watchman to make a living, and later joined the Indian Army as a sepoy after passing Class 8. He never gave up his pursuit of higher studies and did his secondary and senior secondary schooling, and thereafter completed college through distance education.
“As a sepoy, I used to look at army officers with awe and thought of becoming one, and started my journey without worrying much for the result,” he said, adding that it is not easy for a sepoy to prepare for exams amid the strict and disciplined life in the army, “unless one is fully determined and dedicated.”
Longding MLA Tanpho Wangnaw, who was also present at the programme, urged the youths to draw inspiration from Lt Wanpan and prepare themselves to face all competitive examinations.
“Laichat has truly proven that a person who has studied in a government school is no less than any other student from private schools,” he said, and appealed to the parents to encourage their children to study hard.
The MLA also announced an award of Rs 10,000 each for the Class 10 and 12 toppers of the district in this year’s CBSE exams.
The programme was attended by the commanding officer of the Sikh battalion of the Indian Army, members of various CBOs of the district, retired subedar major Agey Wangsu, ex-servicemen, students and general public. (DIPRO)