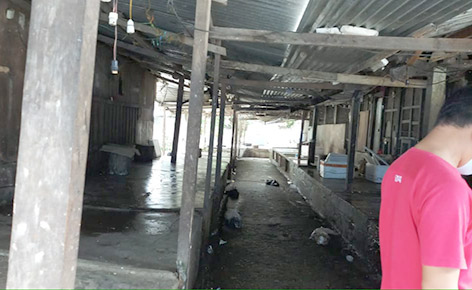 Staff Reporter
NAHARLAGUN, Jul 20: The police here on Monday morning had to close down the grocery stores and the fish market in the daily market area as crowds of people started to throng the market to stock up on their food and grocery supplies.
This happened even as the Itanagar capital region administration in its latest SOP issued on Sunday clearly informed that shops selling ration, grocery, vegetables and meat and fish in all colonies and sectors as well as main markets would remain open during the lockdown from 8 am to 4 pm.
A fish vendor who was preparing to leave his shop said, “The police asked us to close our shops after a big crowd, most of them without masks, gathered around and jostled amid themselves to buy fish.”
Eyewitnesses said the police forced the shopkeepers and fishmongers to close shops and leave.
“All the fish vendors quickly left, while shopkeepers and vegetable vendors closed down their shops after police personnel broke the light bulbs in the fish market,” said one customer.
“Where I was standing, all were maintaining physical distance while shopping. Police personnel should have been there to check that
people were following necessary guidelines when shopping, instead of forcing shopkeepers to close down shops,” said another eyewitness.
The police department, however, stated that the move was made as a precautionary measure because the police station here is located just a few metres away from the fish and daily market area and the police station has been sealed because many policemen recently tested Covid-19 positive.
When contacted, Naharlagun Police Station OC K Yangfo said, “The fish market is very close to the police station. We were thinking about the safety of the people. There was a huge crowd in the market; therefore we asked the fish sellers and vegetable vendors to take their goods and sell them at other locations in sectors and colonies.
“There is danger of transmission of infection when so many people gather at the same place,” he said.
“Dokum Colony near the police station has reported the maximum number of Covid-19 positive cases. It is wrong that people should gather at a place in a situation like this,” Yangfo added.
Explaining about the situation inside the police station, the OC said that, though the station has been sealed, they are still working, despite the fact that the risk of infection is much higher.
“We have to travel in the same vehicle, eat at the same place, work at the same computer, and sometimes share our phones. It is therefore not possible for us to maintain physical distancing in order to avoid contracting the virus,” he stated.