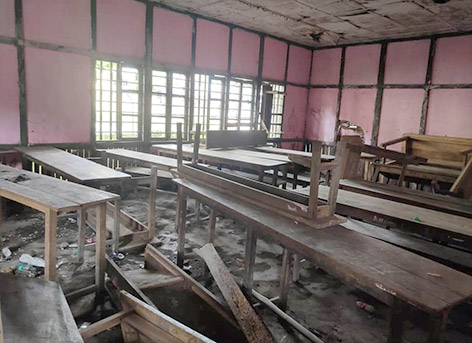 DAPORIJO, Jul 28: The All Upper Subansiri District Students’ Union has lodged a complaint at the police station here against unknown miscreants who recently vandalized the government bazaar middle school here.

Videos and photographs of the vandalized school have gone viral on social media, resulting in severe criticism of the district administration and the police for their failure to nab the vandal(s).

Headmaster Tapor Garam informed that the school authority had lodged an FIR on 30 March. Nearly four months on, no headway has been made in the case.

However, Daporijo PS OC G Basar informed that 12 juveniles have been interrogated so far and the investigation is “in process.”

Earlier, in February, the DDSE had been apprised of the dilapidated condition of the school, besides other grievances like lack of a boundary wall, unavailability of drinking water facility and electricity connection, etc.

Local MLA Taniya Soki had inspected the school on 27 June. He had assured to have it renovated, and to address the other grievances, in consultation with the state government.