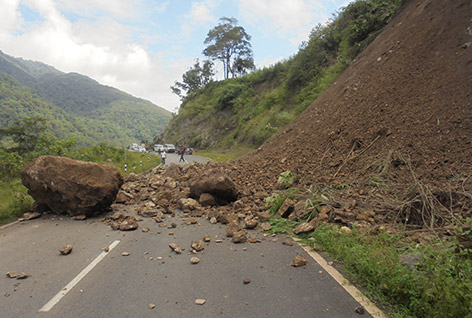 [ Prafulla Kaman ]
PASIGHAT, Jul 29: Heavy landslides along the Pasighat-Yingkiong Trans-Arunachal Highway continued following the torrential rainfall for last one week in the Siang valley.
Landslides have been severe between Silli and Mariyang portions along the highway. Landslides occur almost every day at the highway, stranding passengers for many hours as they have to wait for the arrival of the highway department’s earth mover vehicles to clear the roadblock.
Mudslides and erosions caused by overflowing streams and waterfalls have caused extensive damages to the highway at several points and the roadblocks caused by the torrential rain are yet to be cleared.
Travellers also witnessed heavy landslides that occurred at Jeying portion of the highway on a bright sunny day last Sunday as sandy soil and boulders rolled down from a horticulture garden and blocked the road.
While the highway authority started to clear blockades, the work progress was clearly inadequate.
According to highway officials, it will take weeks to remove the landslide debris from the road sides.