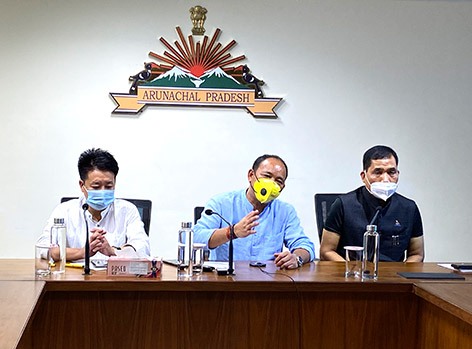 ITANAGAR, Jul 31: Sports Minister Mama Natung on Friday convened a virtual meeting with stakeholders to discuss the overall preparedness and requirements in the fight against Covid-19 in East Kameng district.

Addressing the participants, Natung said: “The real war is now beginning as the virus has entered into our district. We need not only to fight the virus but at the same time learn to live with the virus.”

The minister also stated that the developmental activities under various central and state flagship programmes should not be hampered but “should go along with the coronavirus battle.”

He suggested to the DC to engage stakeholders such as the EKSWCO, the chamber of commerce & industries, and colony secretaries to ensure effective containment of Covid-19 in the district.

Natung directed the DC to constitute a rapid response team, “involving private companies like Sushee Infra, etc, for clearing the blockages on the roads in the district that connect to various subdivisions and the capital, so that communication disruption does not hamper transportation of essential items.”

The minister also directed the district administration to ensure that no village faces shortage of ration and essential items during the coronavirus crisis.

Lauding the efforts of the administration, the police and the health workers of East Kameng, Mangfi in his address asked the DA to “create congenial atmosphere and close coordination among the administrators and the police personnel.” He also suggested to the DC to “involve the EKSWCO in regulating the public.”

Taku in his address called for deploying more police personnel at the district’s check gates to ensure strict checking. He also asked the DA to ensure that hassle-free ATM service is available in Seppa.

Expressing displeasure over “the recent differences between the administrators and the police,” the MLA called for “resolution of differences within the four walls and working for the greater interest of the district as a team.”

The elected representatives of the district later announced to divert Rs 25 lakhs from their MLALAD funds towards Covid-19 management in the district.

The DC made a PowerPoint presentation on the overall preparedness against Covid-19 in East Kameng. He informed that the district requires “more rapid antigen test kits, a general medical officer at the district hospital, and two ambulances.”

Polumatla also informed that, due to blockages at multiple locations on the Seppa-Bhalukpong road, the district may run short of ration stock. He requested the authority concerned to “re-route the ration supplies from the existing route, using the Banderdewa-Itanagar-Sagalee route.”

Sangno spoke on the fund crisis being faced in managing the Covid-19 situation, and requested the elected representatives to ensure that fund is released at the earliest.