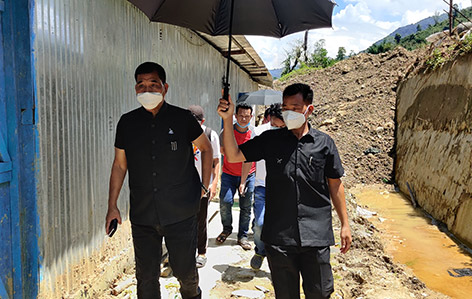 Speaking to reporters, Taku said that once completed, the WTP would provide fresh drinking water to the entire population of Seppa township.

“The WTP is my dream project, and could only be made possible under the guidance of Chief Minister Pema Khandu,” he said, and requested the public to cooperate with the executing department to ensure early completion of the project.

He informed that the project is being constructed under the rural infrastructure development fund.

PHED EE Bharat Sonam, who accompanied the MLA, informed that the augmentation of water supply to Seppa in phase-I of the project, which started in 2017, was completed in 2019.

“The site development, approach road and drain, construction of RCC headworks, pre-sedimentation tank, clear water reservoir, etc, have been completed in phase-I,” he said, adding that the formation-cutting work for laying of DI pipes is yet to be completed.

Sonam said that phase-II, which is to provide drinking water to the people of the township, started in 2019.

“The target year of completion of the work is March 2022, but we are making all efforts to complete the project before the deadline,” he said.

“The toughest task is the laying of pipeline due to public hindrance and the Covid-19 pandemic which has caused shortage of labour,” he said, adding: “People want the project to be completed soon for safe and clean drinking water, but there are a few who do not want to spare even a metre of land for the laying of the pipeline.”