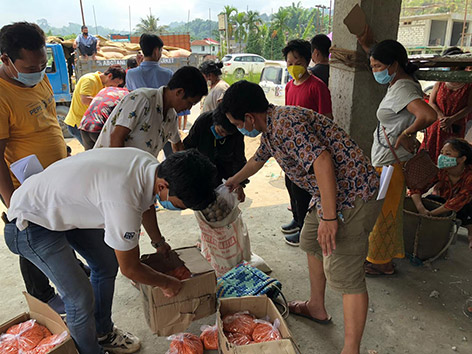 ITANAGAR, Aug 3: A group of likeminded people of the Koloriang assembly constituency, under the aegis of the 21st Koloriang SHG, are providing assistance to the people of Kurung Kumey HQ Koloriang residing in various parts of the ICR, particularly daily wage earners, unemployed youths and students who are stranded and facing food scarcity due to the lockdown.

The group’s chairman, Bengia Reekam informed that till now they have covered more than 400 families in Itanagar and will continue relief distribution in Nirjuli and Naharlagun.

“Around 1000 beneficiaries have been identified by the volunteers. So far, we have covered Nyokum Lapang, Modijiro and Chimpu areas. Basic items like rice, dal, soap, cooking oil, etc, are being distributed,” informed Reekam.

“Our initiative is purely non-political in nature and to help poor people of the five zilla segments of the 21st Koloriang assembly constituency living in the ICR,” added Reekam.