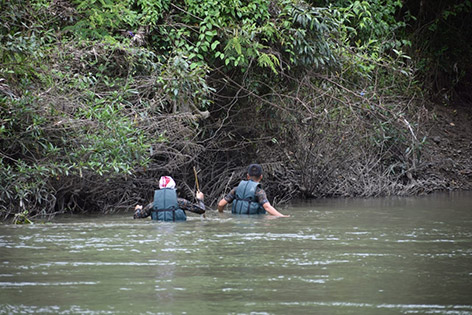 JAIRAMPUR, Aug 5: The body of a Mizo Evangelist, Rintlaunga Molshey was retrieved on Wednesday after three days of extensive search operation under the supervision of SDPO Tasi Darang, in collaboration with the local administration.

The 29-year-old evangelist of the 7 Days Adventist Church, had reportedly drowned at the Namchick River here in Changlang district while fishing on 2 August, and the matter was reported at the Jairampur police station.

The search team had to face several difficulties in retrieving the body, including muddy river water.

On Wednesday, the police team acquired lifejackets from the 19 Assam Rifles and conducted search operations downstream along both sides of the river, under the command of the SDPO and OC SI Umeshan C.

After rigorous search of over three hours, the dead body of the deceased was spotted by Ct (D) Linya Ado and Ct Atiyosafa Yobin, about 5 Km downstream from the site of drowning.

The search operation by the police was held under the supervision of Changlang SP Mihin Gambo in collaboration with the administration, headed by ADC Jairampur Ibom Tao.

A case of unnatural death has been registered at the Jairampur police station.