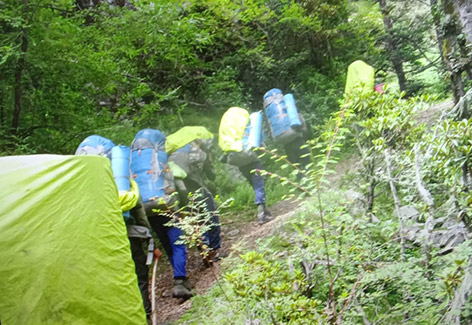 ITANAGAR, Aug 10: Forty personnel of the Indian Army’s Sword Division based in Missamari (Assam), along with ITBP personnel, members of Dirang-based NIMAS, and local youths from East Kameng district embarked on a joint trekking expedition on 5 August to commemorate the 73rd Independence Day at Schokar Sham lake, at the base of Gorichen peak.

Located at an altitude of 16,400 feet, the lake is close to the Line of Actual Control along the Sino-India border.

The team will trek a distance of 150 kilometres back and forth between Jang and the base of Gorichen, covering arduous valleys and treacherous heights ranging from 11,000 feet to over 16,000 feet.

The expedition members will unfurl the national flag on the 73rd Independence Day at an altitude of 16,400 feet, close to the LAC.

The objective of the joint expedition is to develop team spirit, camaraderie and character-building among the troops and local youths of far-flung areas of Arunachal.

It is also aimed at promoting eco-friendly tourism and boosting local tourism in the state, which has been identified as one of the focus areas by the eastern army commander and the Gajraj Corps commander, in consultation with the Arunachal government.