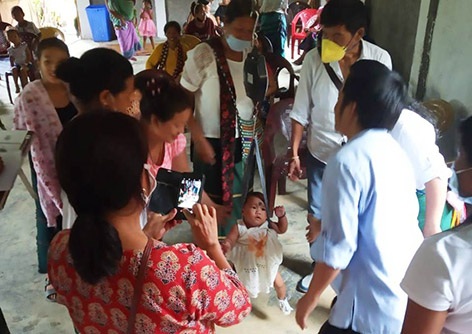 KHONSA, Aug 11: Breastfeeding Week was launched at New Tupi village in Kapu circle of Tirap on 7 August by the district administration, in collaboration with the women & child development (WCD) department.

DRCHO Dr Nidak Angu spoke on the roles and responsibilities of the chiefs, GBs, panchayat leaders and parents with regard to the health and welfare issues of mothers and children.

Dr Angu said that early registration of a pregnant woman is a must. He also highlighted the importance of antenatal care and taking iron folic acid tablets and a balanced diet by pregnant and lactating women, and the importance of institutional delivery.

The DRCHO further emphasized on health screening of newborns at delivery points, besides screening of anganwadi and school children by RBSK teams, and the importance of vaccination.

He appealed to parents to get their children vaccinated.

“Time-bound fully immunized children will be incentivized with Rs 1,000 from the state government,” Dr Angu informed.

The Tupi village GB urged the WCD department to organize such awareness programmes in the village in the future too.

A baby show was also organized on the occasion.

Supervisors from Khonsa, Kapu and Khela blocks, besides anganwadi workers, pregnant/lactating women, adolescent girls, and the people of New and Old Tupi villages attended the programme.

Earlier, a series of awareness meetings on maternal and child health was conducted from 3 to 6 August at the circuit house community hall here.

On Tuesday, DC Bhanu Prabha asked the ICDS DD and the CDPO to ensure that all pregnant women in the rural and urban areas of the district are covered during the Breastfeeding Week, which will continue till 13 August. (DIPRO)