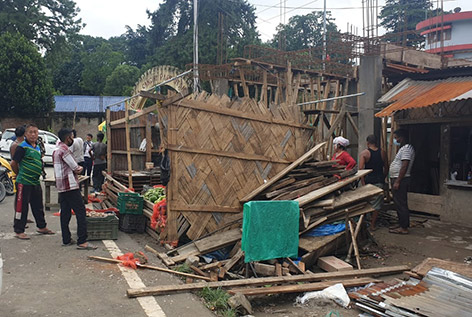 The ADM had earlier issued an order in this regard.

On Tuesday, Potom urged the people to refrain from constructing illegal structures along the roads, be it the highway, or colony and sectoral roads.

“People should follow the law and not take up construction activities within the RoW. The RoW, which was notified twice, in 2001 and 2006, has clearly defined everything,” said Potom.

He made it clear that structures which are being constructed within the RoW will be demolished at some point in the future.

“People who are constructing structures near roads should remember that whenever the government decides to construct or broaden a road, their structure will be demolished after an eviction notice is served. So, don’t waste your money constructing illegal structures,” the ADM said.

He urged people intending to construct structures to do it as per the town planning, in order to avoid controversy in the future.

“The Itanagar capital region (ICR) is being developed as a smart city by the government. The citizens need to understand that no one can or will be allowed to break the law. I appeal to the people of the ICR to cooperate with the authorities,” said Potom.

He further urged the people to stop constructing structures that block natural drains and streams.

“Such people are not only putting their own lives at risk but also the lives of the people of the entire township,” he said.