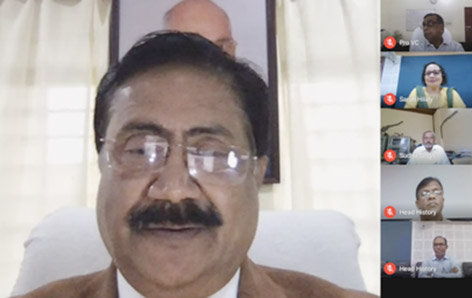 RONO HILLS, Aug 12: A virtual one-day online international symposium on the theme ‘Revisiting Mahatma Gandhi’ was jointly organized by the Centre for Gandhian and Peace Studies (Department of History), department of Political Science and department of Social Work on Wednesday as part of the 150th birth anniversary of Mahatma Gandhi.

Prof Shyam Narayan Singh spoke about the need to sensitize students, academia and the public at large about the ideas and thoughts of Gandhi. He urged policymakers, academicians and the civil society to come together in their efforts to achieve non-violence through debate and dialogue.

Head of the department of Political Science, Prof Prashna Kumar Panigrahi insisted on the need to understand the subtle nuances of Gandhi’s political philosophy and social ethics.

He said that “in the present world of ego-centric leaders and hostile competition between world economies that often push nations to the brink of war; we need to return to Gandhi’s philosophy of international peace and non-violence.”

Head in-charge of the department of Social Work Dr Kaushalendra Pratap Singh stressed that “in this new materialistic world, it is pertinent to remind ourselves that human values are more important than human desires.”

Prof Mitra enunciated that Gandhi was not an economist but had advocated certain policies for the Indian economy and believed in the self-sufficiency of villages where surplus could be sold in the market and worked for the promotion of ‘swadeshi’ goods like khadi.

The VC said “the salient features or objectives of the NEP 2020 are a replica of the Wardha Scheme of Basic Education, 1937, which is also known as Nayi Talim or Buniyadi Talim of which Gandhi was the main proponent.”

These included Prof Pritish Acharya from the Regional Institute of Education, NCERT, Bhubaneswar, Odisha, who spoke on ‘Gandhi and Champaran Satyagraha’.