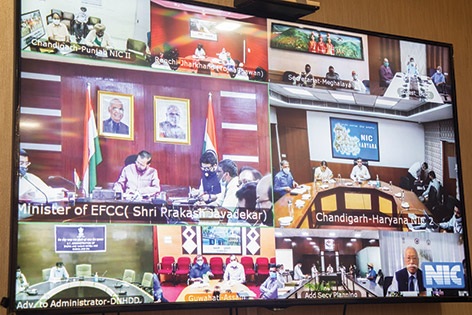 ITANAGAR, Aug 17: Chief Minister Pema Khandu said that Itanagar has been selected for implementation of the ‘nagar van’ or urban forest scheme of the union ministry of environment, forest & climate change (MoEFCC).

Attending a meeting chaired by MoEFCC Prakash Javadekar through videoconference on Monday, Khandu informed that as there are only two urban “cities” in the state – Itanagar and Pasighat – and the state capital has been selected for implementation of the scheme this year.

He said that the state’s environment & forests department has already earmarked land measuring about 20 hectares for creation of an urban forest.

Khandu, who is also the minister in-charge of environment & forests, informed Javadekar that the nagar van scheme would be dovetailed with the smart city project, so that the objective of the scheme is achieved in toto.

Nagar van is a scheme being launched by the MoEFCC to create forests in 200 urban cities across the country on a public-private-partnership basis. The ministry would offer an initial grant of Rs 2 crore for fencing, maintenance and administrative costs of the earmarked land to be developed.

Providing details of the action taken by the state government in implementing various central government schemes with regard to environment and forests, the chief minister said that 100 schools across the state are being identified for the ‘school nursery’ scheme.

Under this scheme, students would grow their own trees in a chosen place within the school premises and care for it. At the end of the year, they would take the saplings and plant them in their house premises.

Khandu further informed that, under the union ministry’s 20-point plantation programme, the state has planted six lakh trees, “surpassing its target of one lakh saplings.” He gave assurance that, by the end of this year, 12 lakh saplings would be planted across the state.

The CM underscored the importance of getting aboard the Centre’s national transit pass system, under which stretches of forest land are owned by communities as well as individuals.

As the system (through a portal) ensures seamless movement of forest produce across the country, giving farmers the economic right over their forest land, Khandu said that “in such a situation, farmers will get motivated to plant trees of their choice, increasing the forest cover of the state.”

He directed the state’s officials to get on board the portal as soon as possible and create awareness among the farmers.

The meeting, which was also attended by union MoS for EFCC Babul Supriyo and the forest ministers of 30 states and union territories (UT), discussed the six schemes being launched by the union ministry. These are nagar van, school nursery, plantation, the national transit pass system, water and fodder augmentation in forest land, and rejuvenation of 12 major rivers. The schemes will be launched in coordination with the states and the UTs. (CM’s PR Cell)