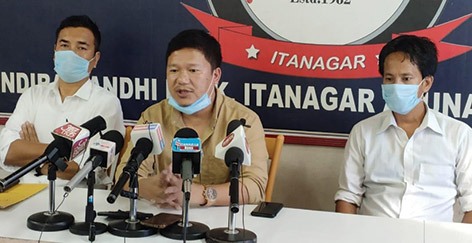 ITANAGAR, Aug 26: The All Arunachal Pradesh Students’ Union (AAPSU) on Wednesday reiterated its stand on the Naga Peace Accord, and said that it will “never compromise on the territorial integrity of the state.”

AAPSU president Hawa Bagang said, “The AAPSU welcomes and appreciates the progress towards restoring peace in Nagaland but it should not be at the cost of diluting the territorial integrity of the state.”

Bagang, who was addressing a press conference at the Arunachal Press Club here, added that any initiative towards restoring peace at Nagaland should be restricted within the territory of Nagaland and compromising territorial integrity of Arunachal Pradesh will warrant “drastic movements.”

The AAPSU president also reiterated its stand on the vexed demand for autonomous district council and said that “the concerned people should stop lobbying for something, which will never happen.”

“As long as the AAPSU exists, the autonomous district council will never see the light of the day,” said Bagang while adding that “even the central government won’t let it happen.”

He also added that “as long as the AAPSU exists even if the state is brought under the 6th schedule, the demand for autonomous district council would never be allowed to materialize.”

On Home minister Bamang Felix’s recent statement regarding seeking more constitutional rights for the state’s tribal population, the AAPSU president said that they welcome the state government’s move and said more emphasis should be given on amending article 371 (H).

Meanwhile, AAPSU general secretary Tobom Dai demanded that all stakeholders of the Naga Peace Accord should be consulted before taking any final decision because “any unfavorable decision against Arunachal will have far reaching ramifications and that the state and the central government will be held responsible for any law and order situation.”

Informing that the Naga Peace Accord is affecting many parts of the state, Dai said that the state government should make its stand clear in a transparent manner while also consulting with the community based organizations.