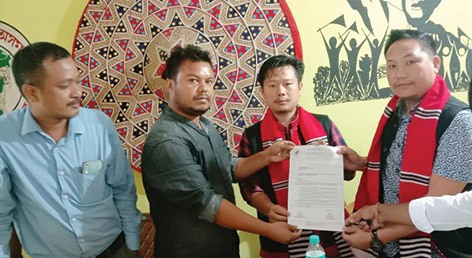 RUKSIN, Aug 29: The Dhemaji district unit of the Asom Jatiyatabadi Yuba Chatra Parishad (AJYCP) has sought help from the Adi Students’ Union (AdiSU) in controlling illicit trade of tobacco products and other narcotic substances in the interstate boundary areas.

During a meeting at Jonai (Assam) on Saturday, representatives of the AJYCP unit and the AdiSU pledged to work together to control the sale of tobacco and products such as gutkha, paan masala and other nicotine-based items in the interstate boundary areas.

Former AJYCP president Jyotish Doley, along with the AJYCP’s district committee executive members Jiten Mili and Nila Kt Gogoi suggested to the AdiSU to initiate a joint effort to curb the narcotics and drugs trade in the boundary areas.

AJYCP leaders in a petition to the Jonai SDO recently stated that a section of unscrupulous traders supply tobacco and products like gutkha, paan masala and other narcotic substances for sale from shops and ghumtis in the boundary areas. The AJYCP is moving the Dhemaji district administration to control the sale of tobacco products and narcotic substances.

The AJYCP leaders said they would submit a petition to the Ruksin ADC also, seeking his initiative to control the illicit trade in Ruksin area, bordering Jonai.