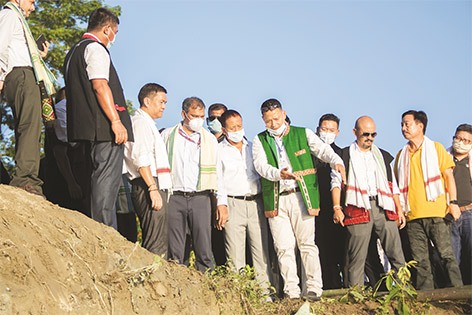 PASIGHAT, Sep 1: Chief Minister Pema Khandu on Tuesday inspected the flood-affected areas of Namsing circle in East Siang district, which has been ravaged by the Siang river.

Khandu inspected the stretch of the Mebo-Dhola road – the lifeline of Mebo area – which was washed away by the rampaging Siang river. About 700 hectares of agricultural areas were also lost in the recent flood.

The CM was later joined by the seven-member inter-ministerial central team headed by Home Ministry Joint Secretary (FFR) KB Singh, which is inspecting the damages caused by the monsoon in the state this year.

The CM also visited the site where the villagers of Namsing had constructed sandbag spurs and bamboo porcupines voluntarily to protect their village and agricultural land against the river in spate.

While interacting with the villagers, the CM expressed appreciation for their effort, and assured that flood protection work would be carried out in the village this year “on a larger and better scale, using newer technology.”

The CM said the state government had earlier sanctioned Rs 35 crore for flood protection work but the protection wall was washed away this year by the Siang river.

Khandu also inspected the government lower primary school in Sigar village, which has been damaged by the river.

Later, addressing a meeting at the DC office here, the CM said the state incurred heavy damages this year due to floods, and informed that he requested for a central team to carry out ground inspection of flood damages in the state.

“Whatever funds the Centre grants for flood damage, it will be used judiciously,” he said, and called for strict third-party monitoring.

East Siang DC Kinny Singh made a PowerPoint presentation, highlighting the flood damages in the district, and said the unprecedented heavy rainfall this year caused massive erosion, damage to cropland, erosion of fertile agricultural land, and flooding of low-lying areas and infrastructures.

“The fertile land, the rice bowl of East Siang, needs to be saved and protected,” she said.