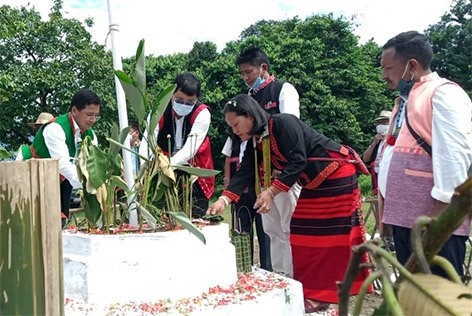 There was neither community programmes nor cultural presentations this time, and the people mostly restricted the celebration to their homes.

The 54th central Solung festival was celebrated in a less colourful manner than usual at Gidii Notko here by the Pasighat Central Solung Festival Committee (PCSFC).

Extending festival greetings, PCSFC’s permanent standing committee chairman Tapi Darang said: “Our age-old festivals, celebrated since time immemorial, reflect our rich repository of traditions, cultures and mythologies that need to be passed down to the future generations. Our Solung mythology also traces the origin of mankind and the significance of the festival for peace and prosperity of mankind.”

PCSFC general secretary Oyin Moyong informed that the first central Solung festival was celebrated in 1966 under the guidance of Golgi Bote Talom Rukbo. Moyong called for protection and preservation of the state’s festivals, customs, traditions, folklores and dances for posterity.

ADC (HQ) Taddo Borang narrated the Solung mythology, and spoke on the significance of performing taku, tabat and ekop to propitiate Dadi Bote, Kiine Naane and Doying Bote for the wellbeing of humankind, prosperity and bumper harvest.

Reports of Solung celebration were also been received from Yagrung, Sille Oyan, Bilat and Korang circles.

The festival is generally celebrated for four days. (With DIPRO inputs)