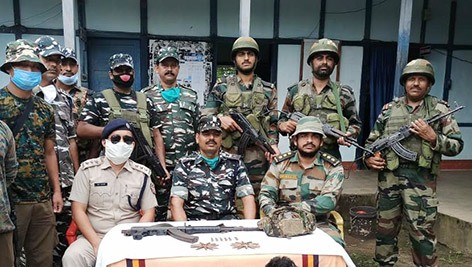 CHANGLANG, Sep 4: Changlang police along with the Indian Army and paramilitary forces busted an extortion racket in Mpen area in Changlang district with the arrest of an individual identified as self-styled (SS) private Wangmon Khimhun (22).

Khimhun was apprehended from the general area of Mpen on 3 September during a joint ‘cordon and search operation’ conducted by the district police, the 171 Bn CRPF and the 14th Rajput Regiment, informed Changlang SP Mihin Gambo.

“The operation was conducted based on input received from sources about the presence of an armed cadre of NSCN (K) in the area,” the SP said.

The security forces recovered a Chinese-made assault rifle, a magazine, 29 live ammunitions and other incriminating documents from Khimhun’s possession.

Based on inputs provided by him, an intensive search operation was carried out by another team of the

district police and the 171 Bn CRPF at several locations on Friday, and a cache of AK-47 ammunitions, 101 live rounds, four magazines, one pouch and one holster were recovered from the hideouts.

During interrogation, Khimhun revealed that he had joined the ENNG in January 2020 and left the outfit in August. He admitted that he along with his accomplice had carried out extortion in the Mpen area in the name of the NSCN (K), Gambo said.

A case has been registered at the Miao police station under relevant sections of the IPC, the Arms Act and the UAP Act.

The joint operation was planned and launched under the supervision of the Changlang SP, in coordination with the 171 Bn CRPF CO and the 14th Rajput Regiment, under the guidance of the PHQ and the DIGP (TCL).

On 2 September, the 19 Assam Rifles apprehended an active ULFA (I) member, identified as SS sergeant Bhaity Asom (30), from the vicinity of BP 172 in Nampong circle. A 9 mm pistol was also recovered from the jungle, which the police suspect was kept hidden by ultras.

A case has been registered at the Nampong police station under the Arms and the UAP Acts, the SP said.