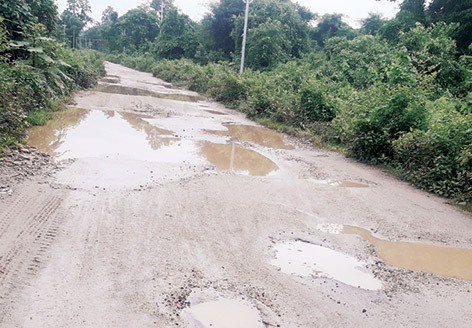 RUKSIN, Sep 7: Flashfloods triggered by heavy rains have left a trail of devastation in the Siang valley and worsened the Mirem-Mikong-Jonai (MMJ) road.

Overflowing streams and drains have damaged the 14-km PWD road at several portions between Ruksin and Mirem villages in the Pasighat West area.

The PWD road, which is lying unrepaired for several years, has become worse after the monsoons and is causing much hardship to commuters. The large potholes on the road in Ruksin, Ngorlung, Niglok and Mikong villages have been causing inconvenience to the traders and office-goers.

Last year, a youth organization of Mikong partly repaired the dilapidated MMJ road, but it soon deteriorated, since the PWD failed to renovate the same area subsequently.

Moreover, the RCC bridge-construction work over the Ruksin, Ngorlung, Sille (Niglok) and Peneng (Mikong) rivers is progressing at a slow rate, which has led to problems in ferrying construction materials to the different production units set up at the industrial growth centre in Niglok.

The MMJ road is the lifeline for the rural people of Ruksin, Bilat and Korang circles of East Siang district as food and essential commodities are all transported to the area through this route.