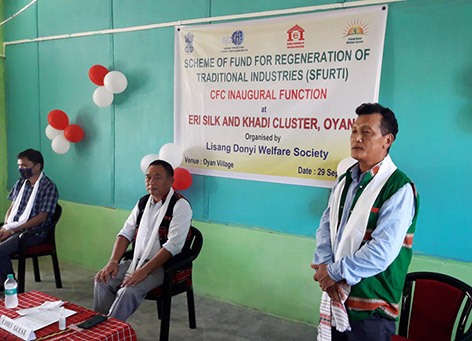 OYAN, Sep 29: The Common Facilitation Centre (CFC) for the artisans of eri silk and khadi cluster here in East Siang district was opened on Tuesday.

Pasighat West MLA Ninong Ering, who inaugurated the CFC, said that the centre would help local entrepreneurs, including rural weavers, in promoting their skills and enhancing their commercial activities.

Ering said that silk rearing and production in East Siang have been making rapid strides in the last couple of years as the Central Silk Board is implementing a number of schemes in the region.

“The rural farmers should avail the scheme’s benefits and promote their economic strength through silk-related activities,” said the MLA, and urged unemployed youths to “adopt industrial activities for self-sustenance, rather than moving for government jobs.”

Textile & Handicrafts Assistant Director Dagmo Riba and Sericulture Development Officer Talong Tadeng assured the implementing agency that they would provide full support from their end. They advised the artisans and women weavers to work with dedication and promote their livelihood through entrepreneurship activities.

The CFC project had been sanctioned by the union small, micro & medium enterprises ministry under the Scheme of Fund for Regeneration of Traditional Industries (SFURTI), with technical support from the Export Promotion Council for Handicrafts.

Oyan-based NGO Lisang Donyi Welfare Society is the implementing agency of the CFC scheme, and the Indian Institute of Entrepreneurship is the nodal agency of the project.