ROING, Oct 1: Even after 11 days, the road block caused by mining and blasting activities of the GREF at 87 kilometres from Roing, on the way to Dibang Valley district, has not been cleared. 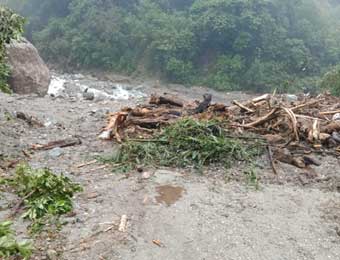 Riniki Milli, a resident of Anelih in Dibang Valley, has been waiting at the block point for the last two days in hopes of getting across to get to Roing for some urgent work. He informed that there are many others who have also been waiting for the last 11 days.

“Many are having to spend a lot on accommodation and food while waiting for the road to be cleared for use again,” he said.

When asked if the GREF was working to clear the road, he said that work is being carried out but at an extremely slow rate.

“If the boulders were pushed down the cliff, it would be much faster and convenient for everyone. However, maybe for some selfish agenda, it seems they are more interested in saving the boulders than in clearing the road and restoring it,” said Milli.

He said that, as the GREF is working on the restoration, more debris are sliding from the mountain onto the road.

Milli also informed that this is not the only road block on the route. “While coming from Anelih to this point, there is another point at 173 kms from Roing where the road is blocked. We had to lift our motorbikes and carry them to the other side of the block, risking our lives. There was only enough space to walk on the narrow path, one person at a time,” he said.

On the brighter side, people from the area informed that, after the report of the death of an ailing person caused due to the road block and another stranded patient was published in this daily, the second patient was airlifted a day later, on 29 September, and he is receiving medical treatment in Roing.