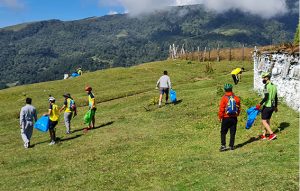 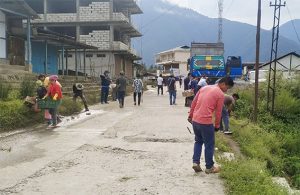 ITANAGAR, Oct 2: Gandhi Jayanti was celebrated throughout the state on 2 October.

In Itanagar, hundreds of men and women participated in the ‘Fit India Movement’ run to encourage people to remain healthy and fit by including physical activities and sports in their daily lives.

Karate Association of India president Likha Tara flagged off the one kilometre run from Chimpu to Itanagar.

In his address, Tara termed the occasion auspicious, as it coincided with the birth anniversary of Mahatma Gandhi.

“Being the living assets of the nation, you should emulate Gandhian virtues in your daily life and behaviour for India to be identified globally as a firm nation,” he said.

The run here was jointly organized by the sports directorate and the Itanagar Municipal Council, in association with the Sports Authority of India.

They said the APCC would raise its voice against the three farm bills passed by the BJP government, “until they are reviewed, revoked and repealed for the interest of our farmers.”

The day was celebrated in all the administrative subdivisions and outposts of the district.

In Changlang district, the day was marked by paying of floral tributes to the portrait of Mahatma Gandhi, a marathon run, and cleanliness drives. In Bordumsa, ADC Talo Jerang offered floral tributes to the Father of the Nation in the presence of GBs, government officials and others, while in Jairampur subdivision, ADC Ibom Tao along with Nampong MLA Laisam Simai participated in a cleanliness drive.

In Namsai district, the Krishi Vigyan Kendra organized training programmes on nutritional kitchen garden and organic farming at Napotia village and other areas. Vegetable seeds were distributed among anganwadi workers to develop nutri-gardens at the anganwadi centres.

KVK Head Dr Debasis Sasmal delivered a lecture on “the thought of Gandhi for farmers and the need and importance of integrated farming.”

In West Siang HQ Aalo, a cleanliness drive was organized at the Mopin mandir, and 36 10-litre capacity household compost bins were distributed at Industry Colony by the urban development & housing (UD&H) department.

UD&H EE Hali Welly, who distributed the bins, spoke on “the importance of and use of compost bin in reducing the quantity of waste generated.”

In Dibang Valley HQ Anini, a cleanliness drive was organized from the circuit house to the district hospital.

In Lower Subansiri district, members of the state BJYM, led by its president Ram Tajo, organized a marathon under the Fit India initiative and cleaned up the statue of Mahatma Gandhi. The state BJYM team visited Hong village and local entrepreneurs and kiwi growers. It awarded certificates of honour and appreciation to entrepreneurs Tage Rita Takhe and Nari Laji.

In Nirjuli, the NSS volunteers of the VKV participated in plogging and planted 270 saplings to mark the day, and organized poster making and drawing competitions.

In Kurung Kumey HQ Koloriang, DC Kento Riba led the celebration by paying tributes to the Father of the Nation. A cleanliness drive was also organized.

In Miao in Changlang district, 56 cyclists of all ages participated in a cycling event held to mark the 151st birth anniversary of Mahatma Gandhi.

Local MLA and UD Minister Kamlung Mossang flagged off the ‘cyclothon’ from the general ground in Miao, and also participated in the event.

In Lower Dibang Valley, the BJYM unit organized cleanliness drives and plantation programmes in various parts of the district to mark the occasion.

The BJYM members distributed dustbins after conducting cleanliness and plantation programmes in Meka village playground, the Meka GSS premises, the Meka PHC, the Injonu GMS, and the Koronu GHSS and CHC.

The day was celebrated with similar programmes in all other districts of the state. (With inputs from DIPROs, correspondents and PTI)