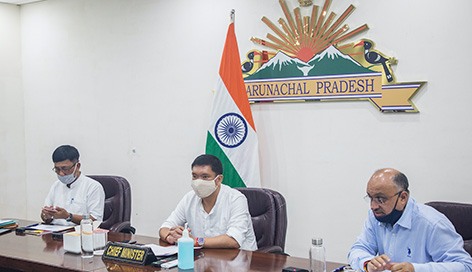 ITANAGAR, Oct 5: Stating that “agriculture is the backbone of our society,” Chief Minister Pema Khandu gave assurance that his government would play a proactive role in supporting farmers in implementing all centrally sponsored schemes in Arunachal.

Taking stock of all the central schemes being implemented in the state with the departments of agriculture, horticulture, animal husbandry, veterinary and fisheries here on Monday morning, Khandu assured the departments’ officers of financial support to schemes that require state share.

“As implementation of agri and allied sector schemes is time-bound and seasonal, delay in release of state share of funds should be avoided,” he said.

On being informed that the state share is yet to be released for utilization of central shares, the CM asked the chief secretary to convene a meeting of the departments concerned with the finance and planning department officials, so that all pending cases of state share are resolved at one go.

“We cannot wait for lengthy procedures to release the state shares for centrally sponsored schemes under the agri-horti and allied sectors. It shouldn’t happen that, by the time the state shares are released and the schemes are ready to be implemented, the season for the same is over,” he said.

The newly passed farm bills and their impact on Arunachal were also discussed at the meeting. Khandu said the new bills, which have now become acts, would help farmers augment their income, “in contradiction to opposition theories.”

According to the agriculture and horticulture secretary, “Arunachal will have zero impact as one of the acts does away with mandis, wherein farmers sell their produces through middlemen, as the mandi system is nonexistent in the state.”

The secretary informed that, earlier, the APMC used to collect 2 percent cess from farmers transporting their produces, which has been done away with. “As per the new acts, farmers will have the freedom to sell their produces without having to go through any middlemen or paying cess to the government,” he said.

With regard to the infestation of paddy fields, especially in East Siang, Siang, Upper Siang and Lower Dibang Valley districts, that caused huge losses to rice farmers, the chief minister urged the departments concerned to extend help to the farmers in all possible manner.

He informed that the state government would do all it can to mitigate the losses, and suggested providing funds from the state disaster relief fund, which has already allocated Rs 20 lakhs each to all the affected districts.

A detailed discussion was also held on oil palm cultivation, which is a central scheme under the the National Food Security Mission.

Khandu and Agriculture Minister Tage Taki were informed that the state government had signed MoU with three companies – Siva Sai, 3F and Ruchi Soya – for setting up oil extraction factories and buying back oil palm fruits from the farmers under the scheme. While several farmers will be harvesting for the first time this year, the companies are yet to establish the infrastructure.

The chief minister took serious note of it and directed the secretary to take it up with the companies’ authorities and the deputy commissioners concerned urgently.

“As has been proved, oil palm grown in the state is of top quality, and the scheme should be prioritized,” he said.

Khandu also emphasized on prompt implementation of the recently launched Prime Minister’s Matsya Sampada Yojana, under which the Centre along with the state will bear 60 percent of the total cost for establishing a fishery and 40 percent will be the beneficiary’s investment.

“This is a very important scheme and people will jump to take it,” the CM said, and negated the department’s concern about people being reluctant to invest 40 percent, saying 60 percent funding by the government “is a huge relief for any enthusiastic farmer.”

“Only genuine farmers will approach to avail the scheme, and with their own money in the project, they will take great care of it,” he said.

Several schemes, such as the PM’s Kisan Yojana, the Rashtriya Krishi Vikas Yojana (Raftar), etc, were discussed and reviewed.