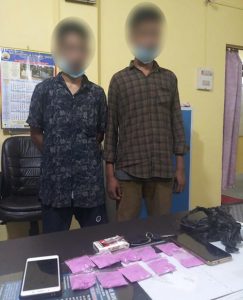 ROING, Oct 9: The anti-drug squad (ADS) of the police here in Lower Dibang Valley district has arrested two drug peddlers and confiscated 50 grams of suspected brown sugar from their possession.

Working on tip-offs about drugs being supplied to the district from Namsai by an Assam-based peddler with the help of a local youth, the ADS team, led by OC Lod Tari and SI T Hagging, under the supervision of DSP Ringu Ngupok, trapped and arrested the duo in Abali village on Thursday, at around 4:30 in the evening. They were making their way to Roing in an Accent car. After searching the car, the ADS seized the narcotic substance.

A case u/s 21 (b), NDPS Act has been registered at the police station here and is being taken up for investigation.

Praising the ADS on its success, the DSP said that the police under the leadership of SP Sanjay Kumar Sain “has zero tolerance towards drugs and have been immensely successful in curbing drug trade in the district.”

However, he cautioned the people to not be complacent with the success, saying that “there is a lot of work to be done by both the police and the civil societies to realize the dream of a drug-free Roing.”