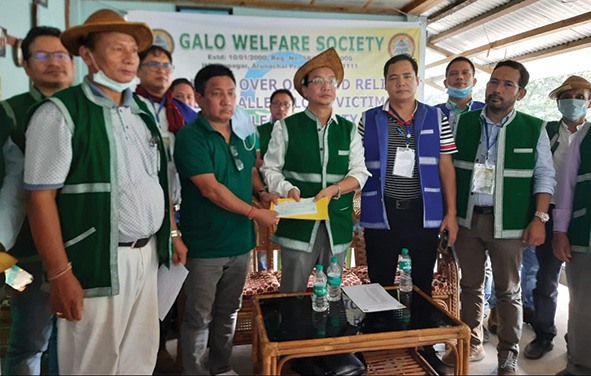 ITANAGAR, Oct 12: The Galo Welfare Society (GWS)  handed over a relief package of Rs 15,09,437 as second installment to the chairman of the Interim Relief Fund Raising Committee (IRFRC) on 10 October for distribution to the families affected by the recent flashflood that occurred in Ego in Leparada district.

Heavy flood and landslides destroyed houses and properties in the area on 17 September, and two lives were lost.

During the handing-over ceremony, EAC Mokar Riba also donated Rs 1,44,001 on behalf of the APCS 2003 batch to the IRFRC.

The victims of the flood and landslides apprised the GWS delegation of the untold miseries they are facing, and said the flood damages in Ego were a “manmade disaster due to negligence of the road construction agency,” the GWS stated in a release.

The GWS team, led by its president Tanga Kena, assured to pursue the competent authorities for immediate restoration of electricity, potable water supply and road communication in Ego, and reiterated its appeal to the central and the state governments to provide adequate relief and rehabilitation packages to the flood-affected families.

“The entire Ego valley is in complete darkness since 17.09.2020 due to flood damages to Dali hydel,” it said.

The GWS president said that the two-lane Akajan-Likabali-Bame road, “sanctioned under various SARDP packages, is in a deplorable condition and the inordinate delay in completion of project by the construction agencies is unfortunate, which is causing untold miseries to the commuters of five districts and defence personnel.”

Kena informed that a Galo Gumin Highway & Infrastructure Coordination Committee as been constituted under the chairmanship of retired secretary to GoAP Tomi Ete to coordinate with the government, the executing agencies, the public and the contractors to ensure completion of major projects like highway, bridges, major water supply projects, telecommunication network, sewers, and stadiums in Galo-inhabited districts.

Besides leaving two persons dead, the flood of 17 September rendered many families homeless, washed away shops and hotels, and destroyed properties worth crores of rupees, the GWS said.

“The RCC bridge over the Ego river, connecting Lower Siang with Leparada, West Siang, Shi-Yomi and Upper Subansiri districts has been completely damaged, snapping road connection to these districts and affecting movement of defence personnel, machineries and artilleries to the various army outposts along the sensitive McMahon line,” it said.

The GWS said it was pained to see that the construction of a temporary Bailey bridge is yet to commence, 24 days after MoS Kiren Rijiju had said that the NHIDCL had assured to construct the bridge within 8-10 days.

The society also appealed to Rijiju to “visit Ego with a central relief team for on-the-spot assessment of flood damages and announcement of relief and rehabilitation packages to the flood victims.”

Later, the GWS team held a meeting with Basar MLA Gokar Basar, and discussed with him the relief and rehabilitation measures to be taken up for the flood victims.

The local MLA along with some local elders of Basar assured the delegation that they would donate land for establishing a ‘Galo secretariat-cum-heritage site’ in Basar.

The GWS team also inspected the flood damages in Padi, Chisi and Dali villages, and the construction of the two-lane highway.