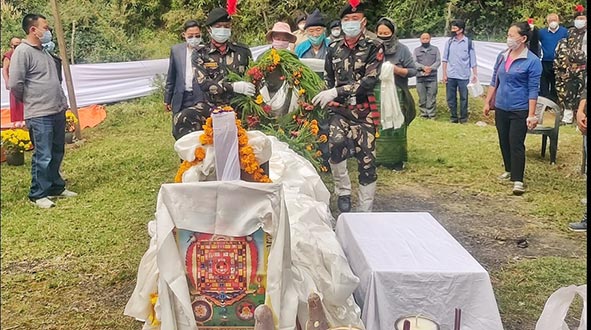 TAWANG, Oct 19: The last rites of former minister Tsering Tashi was carried out on Monday afternoon at Tsum Di Tse in his native village Khirmu in Tawang district.

His mortal remains were flown from Itanagar to Tawang in the morning by his family on a helicopter.

On the arrival of the mortal remains in his native village, APP personnel presented a guard of honour, which was followed by paying of floral tributes and offering of traditional scarves (khada) by Tawang ADC Lobsang Tsering, SP B Kamduk, other officers, family members, relatives and villagers.

The paying of floral tributes was followed by chanting of mantras by monks from the Tawang monastery and offering of fire by senior monk of Sera Je monastery, Geshi Jampa Thrinley. (DIPRO)