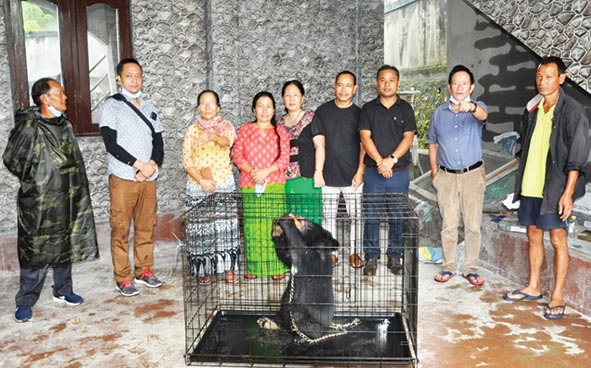 AALO, Oct 23: A nine-month-old she-bear named Luba, reared by one Terde Yomcha of Lipu Yomcha village, was handed over to the forest division here in West Siang district, which in turn handed it over to the state zoo in Itanagar on Friday.

Yomcha had purchased the she-bear from someone at a tender age. He reportedly spent his entire school stipend received during the year on rearing Luba. She had to be ultimately handed over to the state zoo as she was rejected by the wildlife department, which said that Luba had ‘homely traits’ and would be unable to survive in the jungle.

Yomcha brought the bear all the way from Lipu Yomcha to Aalo, and, on being intimated, DFO Jumdo Geiyi and his team responded promptly and got in touch with the state zoo.

Unlike wild bears, Luba has been brought up as a vegetarian and prefers eating daal and rice, cabbage, maize, tomato, sugarcane, liquid milk, and fruit juices. (DIPRO)