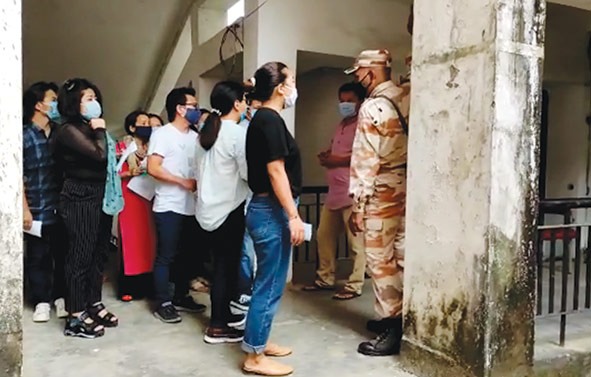 Centres in Yachuli in Lower Subansiri district recorded the highest turnout of 72.82 percent.

The main exam centre, the office of the APPSC, had a seating for a total of 733 candidates.

The candidates that this daily spoke to after the exam, said that they were “satisfied with the way the exam was conducted.”

A candidate who appeared for the APPSCCE for the second time said, “It was held in a much better manner than the previous year. We also received a carbon copy of our OMR answer sheet.”

A first-time candidate said that she was not positive about her result, while another candidate had qualms over the social distancing norms which she claimed were not followed while leaving the centre.

Speaking to reporters late evening, Talwade informed that they were still receiving reports from the sub-centres, and that it was not the final data.

“We plan on announcing the results as soon as possible. It could be within seven to 10 days or even earlier. The exam coordinators have collected all the exam materials, which will be brought to the strong room here. The exam materials from outstation centres will be received by tomorrow afternoon,” he said.

Also asking candidates to give their best, Talwade said, “The APPSC’s main purpose is to recruit meritorious candidates – those who are capable, able and can contribute to the administration. That is our goal. I would request the student community to work hard because the competition is tough. There were 26,000 applicants for merely 111 posts. Such competition requires a lot of hard work.”

He lauded the efforts of the APPSC officials, the government of Arunachal, observers, coordinators, the Arunachal Pradesh Police and other stakeholders for the successful and peaceful conduct of the exam.