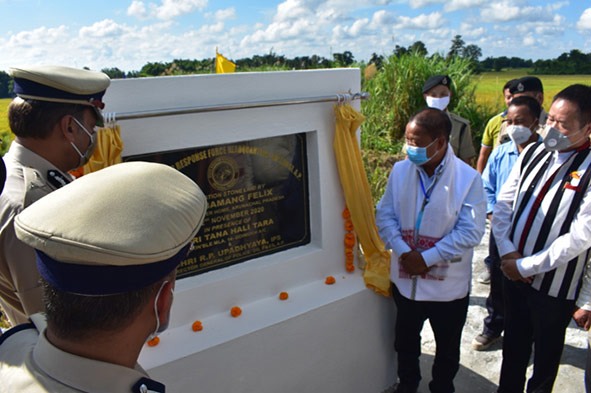 Speaking on the occasion, the minister said that the SDRF plays a major role during natural calamities in the spheres of disaster management in the state and the people of the state depend on the SDRF’s services during such critical times.

He also said the SDRF is a key pillar in the state’s disaster preparedness mechanism.

Expressing concern over the growing cases of disasters in the state, the home minister said most of them are manmade disasters.

“Reckless earth-cutting is the main cause of disaster. This manmade disaster can be stopped by giving education to the people on how to maintain ecological balance. The SDRF can play an important role in this regard,” said Felix.

He commended local MLA Tana Hali Tara for assuring of all kinds of support to the project.

“This is very important as support of political leadership is critical for execution of any development project. Political will matters and we hope that, with the active support of MLA Hali, the project will be completed at the earliest,” he added.

The home minister also informed that Chief Minister Pema Khandu is very supportive of the project.

Tara along with advisor to disaster management department Tanpho Wangnaw, senior police officers and officials of the SDRF and the NDRF was also present on the occasion. He honoured five SDRF personnel for their commendable services in various operations.