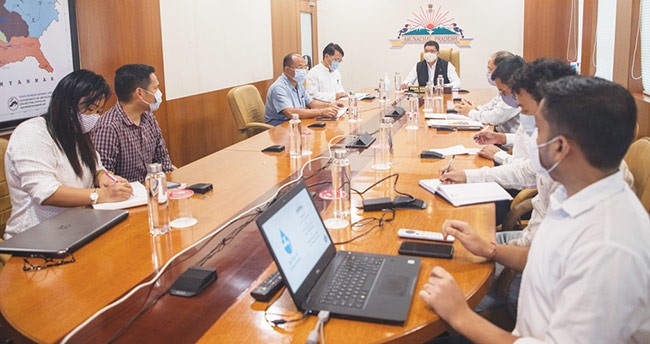 In a virtual conference with all the field officials of the PHE&WS department, the chief minister assured them of support from the state government in meeting the target of the JJM coverage by 2023.

Khandu assessed the coverage of functional household tap connections for rural households and drinking water supply in schools and anganwadi centres. He also reviewed the status of the formation of village water & sanitation committees (VWSC), preparation of village action plans and laboratory testing of water quality.

Taking note of the delay in data entry by various field officials due to technical issues, Khandu urged them to seek immediate technical help for data to be accurately reflected on the integrated management system platform.

Stressing on providing drinking water supply to all schools and anganwadi centres, the chief minister asked the officials to “have proper coordination with WCD and education department for dovetailing of funds and identifying schools with enrollment that require the coverage.”

He also stressed on forming VWSCs “for formulation of action plan and for facilitating third-party monitoring.” Khandu noted that many districts are yet to form such a committee, and requested them to form it at the earliest.

PHE&WS Minister Wangki Lowang also spoke in the meeting, which was also attended by advisor to PHE&WS Minister Lokam Tassar, PHED CE Tomo Basar and other officials of the department. (CM’s PR Cell)