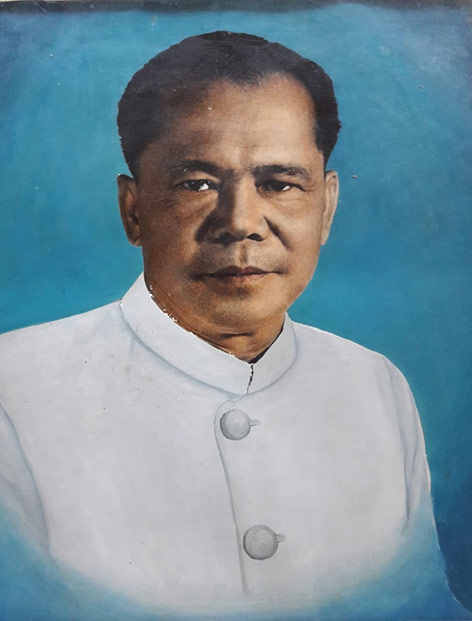 According to Buddhist philosophy, “life is full of suffering and suffering is caused by desire. And desire can be resisted through noble actions. Amidst the sufferings every person takes birth with a unique talent. Such talent whether inborn or acquired is exhibited from early childhood in some cases.”

Such a person with inborn leadership quality was born on 20 October 1920 to the then royal family of Thai Khamti tribe at Chongkham village. He was none other than Chow Khamoon Gohain Namshum, who was nominated twice as the Member of Parliament (Lower House) from then NEFA (North East Frontier Agency), now Arunachal Pradesh. Thus, he has the unique distinction of being the first MP from the state as well as the honour of being elected for life as the Khamti chief.

Chow Khamoon displayed keen sense of observation, inquisitiveness, and leadership qualities from early childhood. His early education started from a Buddhist Vihara school (In those days,  formal education in Thai Khamti society was imparted solely by Buddhist Vihara temples). He did his middle school from then sought-after British English school in Sadiya and high school from the government high school in Dibrugarh, Assam. In 1939,  he had admitted himself into then Cotton Collegiate Guwahati in class IX. During his days in Guwahati, the country was at its peak of the freedom movement. Gandhiji’s call for Quit India touched the heart of all Indians, particularly the youths. Chow Khamoon was no exception and he actively participated in the movement along with his friends.

In December 1940, a peaceful student procession was lathi charged and fired upon by the police under the orders from Humphrey, the British Deputy Commissioner. Chow Khamoon, as the head of the voluntary force, organized first aid and removed the injured to the civil hospital. Consequently, all schools and colleges were closed down. Chow Khamoon had to return home without appearing in the final matriculate examination which abruptly ended his promising education.

Post the country’s Independence on 15 August 1947, one of the many challenges faced by the then NEFA administration was to find out ways to bring the people nearer to the administration.

Chow Khamoon was found to be the most suitable for the job and he was appointed as the honorary Assistant Political Officer (APO) and  assigned the charge of then Lohit Frontier Division, comprising the present districts of Upper and Lower Dibang Valley, Lohit, Anjaw and Namsai.

The top priority of the new APO was education, without which necessary human resources could not be mobilized for urgent construction of the society. He constantly urged the administration to open as many schools as possible. Surface communication was his next priority. On his insistence and on grounds of border security, the Sadiya-Tezu-Walong road was taken up. Post the 1962 Chinese aggression, the importance of this road needs no emphasis. This is but just one illustration of the foresight of the young Chow Khamoon.

On 15 August 1950, an earthquake of 8.6 magnitude occurred in North East India, with the epicentre in the Mishmi Hills, close to the Mcmahon Line. This was followed by heavy flood which virtually led to the disappearance of Sadiya -then the eastern most trading centre and a beautifully planned town on the right bqnk of the Lohit River. Thousands of people and cattle had perished then.

Chow Khamoon was appointed the head of the government relief committee for Lohit Frontier Division to provide immediate relief and help to the affected people. This provided a unique opportunity to Chow Khamoon to display his inborn leadership qualities and talents as a social worker and a friend in need. He worked day and night to provide succour to the needy.

The famous Parashuram Kund and the track leading to it were badly damaged and pilgrimage discontinued. The local administration had given up. However, Chow Khamoon strongly believed that the tradition of holy bath during Makar Sankranti must be maintained. He also trusted that the historically famed place had a great potential as a future tourist hot spot. He revived both the kund and the track using his personal resources, like workers and elephants. Parashuram Kund is now not only a tourist hot spot but also a great historical and religious asset for the state and the nation.

In April 1952, Chow Khamoon was nominated as the first MP, representing the whole of then NEFA, by the president of India. He was renominated in 1957 for the second term. However, he took the unprecedented decision to quit the coveted public office of MP without completing his second term for he believed that one could render help to people even outside the public office. He also wanted to set an example to the people for self employment. He first started with timber and then graduated to a widely popular plywood brand and then into the tea industry. He was thus the pioneer in the field of industry in the state.

For the record, he was the first Arunachalee to genuinely build and run his own industries unlike many during his time who conveniently leased out their licences.

Before quitting as MP,  Chow Khamoon persuaded Daying Ering, a promising and upcoming young man to succeed him. The worthy successor brought honour to the state when he was made deputy minister in the Nehru cabinet.

Why is he called the pioneer of modern Arunachal Pradesh? Because as the first MP he was instrumental in laying the foundation on many diverse fields of development. His first and foremost attention was on the urgent need to spread education. Towards this goal he extensively toured the state unmindful of personal safety in the early times when travelling was hazardous due to poor or virtually non existent surface communication. He constantly urged the people to send their children to school. However, other than land, animals, traditional ornaments etc the value of money was unknown to people who could not afford to fund their children’s education.

To overcome this problem, the MP first met then Prime Minister Jawahar Lal Nehru in person and impressed upon him the urgent need for free and residential schools for NEFA. This was followed by letters to the PM, the governor of Assam and the advisor to the governor (NEFA then was governed by the Governor of Assam through an Advisor). Due to such persistent efforts made by the first MP, the government at last opened the gates for free and residential education in NEFA. Many eminent personalities of Arunachal of the early times (pre missionary schools) are products of this effort.

The MP then next urged the government to introduce incentive based modern methods of farming. On constant push by the MP,  cash paid incentives for wet cultivation through village level workers system to help and educate the people commenced.

The MP also raised and continuously pushed the government on other developmental issues related to cottage industry (on cooperative society basis), health (to open hospitals), communication (urgent need for jeepable roads and establishment of post and telegraph offices to meet the challenges of border security besides connectivity with the people), opening of more administrative centres to bring people closer to the administration and introduction of Gram Panchayat system to spread democratic roots.

He ceaselessly kept in touch with the governor and the advisor even after he ceased to be MP on such relevant matters and more. He desired and advocated for complete national integration of the NEFA in the days when the North East was known for perceived secessionist activities.

He was also extremely concerned about national security. Keeping these objectives in view he built a Buddhist temple each in Walong and  Kaho (both in Lohit valley). The latter which is the last village on LAC was built post the 1962 War with the help of the Army, which continues to maintain it till date. Besides serving the cause of national integration, he believed that such a landmark would help in claiming the extent of our sovereignty, particularly in the light of claim by our belligerent Northern neighbour.

During the build up to the 1962 War, now ex MP Chow Khamoon had rendered selfless and dedicated service to the armed forces, and he was conferred with a gold medal by the government.

Chow Khamoon Gohain Namshum breathed his last on 2nd February 2010 at his native village of Chongkham. A towering personality of his time, he was a man of immense popularity; well respected by people of own state as well as Assam and other North East states. His knowledge and experience in varied fields, affable and generous nature endeared him to all people who came in contact with him. His legendary hospitality is well known far and wide in the region. This is evident from the fact that he was visited till his very last by a variety of personalities from within and outside the country, including the likes of late PM Indira Gandhi. It was his firm belief that whoever came to meet him came with love and took the trouble to do so. His contribution to the welfare of people from all walks of life, rich or poor, old or young, white collar or labour, was legendary.

The government should consider a befitting commemoration in honour of past eminent public figures like the first central minister, first MPs in two houses of parliament, the first CM, gallantry awardees and other achievers in various fields at national and international levels at select places and in a manner deemed fit by them. This will go a long way and earn the goodwill of the people.

Notes: 1. The Ahom regime Sadiya Khowa Gohain (the governor) was defeated by the Khamtis in 1794. Following this, the  Khamti chief who led the victory arrogated to himself the title of Gohain and ruled the region. However, in due course all Khamti clans began to take Gohain as their surname. As the Khamti chief, Chow Khamoon put an end to this practice and directed all clans   including his own clan, the Namshums, to revert to their original surnames. Reversion to Namshum surname began with his own family and children. Though his title is Gohain in all official records, including parliamentary records, it was his wish to be recorded as Chow Khamoon Gohain Namshum.