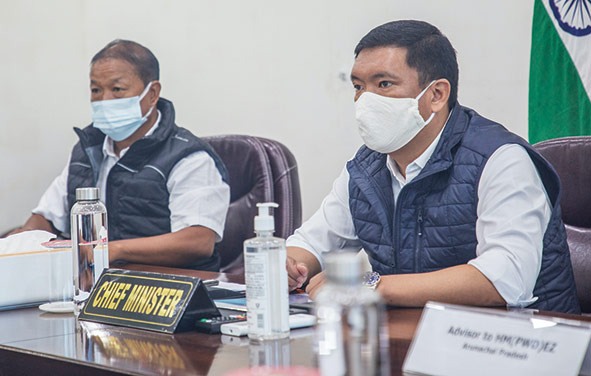 ITANAGAR, Nov 9: Chief Minister Pema Khandu on Monday constituted a committee to monitor the progress of the four-lane highway (NH 415, Package A) 24/7 and coordinate with the implementing agency to ensure completion of the project before March 2021.

During a review meeting with officers of the PWD highway zone, MoRTH representatives and members of TK Engineering, Khandu said the committee while monitoring the progress every day would coordinate with the contractor to facilitate ease of work. It would liaise with other government agencies, so that hurdles, if any, are resolved to fast-track the work.

The committee is headed by PWD (Design & Planning) CE Atop Lego, with joint secretary to CM Kangki Darang, OSD to CM Lham Tashi and consultant Pradeep Mehta as members.

Khandu asked the CMD of TK Engineering, Rotu Techi, to immediately overhaul his men and machinery deployed for the construction of the stretch from Chandranagar to Papu Nallah.

“Common people are suffering a lot. Therefore, we are not going to accept any excuses. Complete the stretch before March,” the chief minister ordered.

He asked the CMD to immediately increase the number of labourers, bring in sufficient materials, and deploy adequate tools and plants with the target in mind.

Khandu also suggested to the implementing party to plan a work-chart of 10 days each, so that targets are achieved from the micro level.

will be able to complete the project even by February. Set February as the target and get down to work,” he said.

Felix on his part said the state machinery is fully committed to the project and is ready “round the clock” to provide assistance to the contractors. Stating that the ball is in the contractor’s court, Felix said that the firm would be the one to be blamed if there is any delay in completion of work.

“On behalf of the home department, I assure you security and protection round the clock. In return, you just have to complete the project at hand by the deadline,” he said.

TK Engineering CMD Rotu Techi said that the progress of work suffered due to the pandemic and the prolonged monsoon season. He, however, assured that, except for the underpass and two bridges, the rest of the work would be completed before the deadline of 20 March.

Techi informed that, while there is no shortage of materials, tools and plants, “engaging labourers in good numbers has been a hurdle.” He, however, informed that the issue is being resolved as now labourers are being brought in from states like Bihar, Jharkhand, etc.

Meanwhile, it was informed during the discussion that, for the remaining stretch from Papu Nallah to Banderdewa (Package B and C), all decks have been cleared by the MoRTH. The tendering process for Package B is underway, which will be immediately followed by Package C.

The status of several other projects under the PWD was also discussed during the meeting.

Also present at the meeting were the PWD commissioner, the PWD secretary and top officers of the highway zone. (CM’s PR Cell)