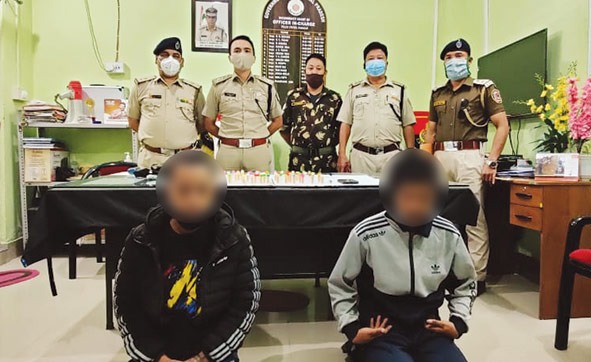 ITANAGAR, Nov 9: Two drug peddlers were arrested here with 68 grams of suspected heroin, estimated to be worth Rs 2-5 lakhs, by the capital police on 8 November.

Acting on inputs, the police also raided five locations, namely, Panchali, Six Kilo, Mowb-II, and two private residences here, from where cannabis was being traded, and seized about five kilos of cannabis on 7 November.

Speaking to reporters, ICR SP Jimmy Chiram informed that, besides working on busting illegal sale of cannabis, the police under SDPO Kamdam Sikom were also gathering intelligence on the drug trade in the capital region, following which the two accused were arrested.

The arrested persons have been identified as Raju Tamang (28), a truck driver from Banderdewa, and his accomplice Majub Kangyang (27), a native of Tirap district.

The SP informed that Tamang, “who himself is a drug user, had procured 50 vials of suspected heroin recently and was planning on selling it in Itanagar, and he was assisted by Kangyang in the clandestine task.”

He also informed that the two, who are currently on remand, have been charged under relevant section of the IPC, so that more information can be gathered from them.

Meanwhile, the SP said that, with the arrest and seizure, the police hope that peddlers would get the message that “it will not be easy from them to bring drugs into the capital, and they will eventually be caught and arrested.” He added that such operations will continue in the future.

Chiram expressed gratitude to EAC Oli Koyu, who is also the state nodal officer for narcotics, for his support and cooperation during the raids, seizure and arrests.