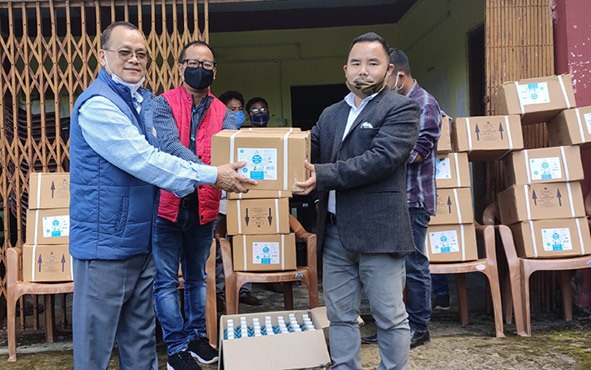 KHONSA, Nov 10: The Tirap district administration [DA], led by DC Taro Mize, provided hand sanitizers to the government higher secondary and secondary schools of the district for distribution among the students.

While handing over the hand sanitizers to the DDSE, ADC [HQ) Kretkam Tikhak informed that the sanitizers were procured with the fund “placed for management of Covid-19 through the district panchayat development officer.”

Hand sanitizers will also be distributed to the households of the four assembly constituencies of the district, the ADC informed.

The hand sanitizers were provided for the students of the Khonsa GHSS, the Borduria GHSS, the GSS’ in Dadam, Lazu, Kapu, Thinsa and Kolam, the government town secondary school in Khonsa, and the Government Pinewood Secondary School in Khonsa.

Expressing appreciation for the DA, the DDSE said that sanitizers for the students of the Deomali GHSS and the Soha GSS will be provided by the Deomali block.