RUKSIN, Nov 12: The delay of several years in restoring the Mirem-Mikong-Jonai (MMJ) PWD road linking Ruksin headquarters with greater Mirem-Bilat area in East Siang and parts of Lower Siang district has drawn flak from the local people and public leaders. 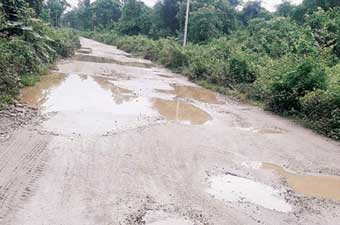 The dilapidated condition of the 15-km long road from Ruksin town to Mirem Charali has caused concern for the commuters. The large potholes on the road in Ruksin, Ngorlung, Niglok, Mikong and Mirem areas are causing immense trouble to local traders and office-goers.

Expressing concern over the lackadaisical attitude of the state PWD officials, the people of Pasighat West area (Ruksin), including local leaders, said: “The department even after receiving adequate fund against MMJ road is playing delay tactics in this regard, which is causing concern of the local villagers.”

It may be mentioned that the DoNER ministry under its North East Road Sector Development Scheme has sanctioned Rs Rs 42.27 crore for complete restructuring of the 15-km long MMJ road, out of which Rs 15 crore has been released as first installment.

Pasighat West MLA Ninong Ering blamed “political red-tapism” for the undue delay. He alleged that the PWD engineers were playing “delay tactics” and thereby “playing irresponsible role in this regard.”

“Owing my responsibility as an elected leader, I moved the department concerned for releasing fund and the project implementation is pertaining to the officials. I appeal to our Chief Minister Pema Khandu to intervene into MMJ road project issue and pass necessary order to expedite the project,” said Ering in Ruksin on Wednesday.

The MLA said he fears that the fund meant for restructuring the MMJ PWD road “may return for not utilizing it within the stipulated period.” He said the officials would be responsible for it.

“The funding authority is releasing fund to carry out road construction works, but the PWD engineers are delaying it under the reason best known to them only,” he said.