ITANAGAR, Nov 12: Rajya Sabha member Nabam Rebia along with local MLA Techi Kaso, ICR DC Komkar Dulom and a host of other officers on Thursday inspected the proposed bridge at Borum which would connect Borum, near the railway station, to Lekhi. 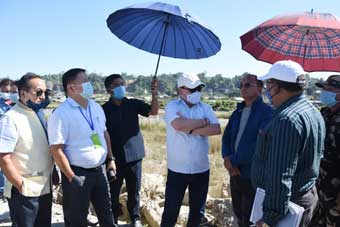 Stating that the bridge would ease communication for people coming from Lekhi, Nirjuli, Karsingsa and Banderdewa, Rebia had a detailed discussion with the representatives of the railways to expedite the pending construction work on the bridge.

Railways Executive Engineer for Construction, Kinkar Das informed that the construction work has slowed down due to lack of funds. He, however, said that “once the funds are provided, the project can be expected to be completed within six months as only super structure is remaining to be completed.”

As the project is being funded centrally by the railways department, Rebia urged it to submit all the necessary documents at the earliest, “so that the matter can be taken up at higher level.”

Kaso also stressed that the bridge is the need of the hour, and urged the officials of the railways to expedite the paper works, “so that the requirement of necessary funds for completion of the project could be taken up at the earliest.” (DIPRO)