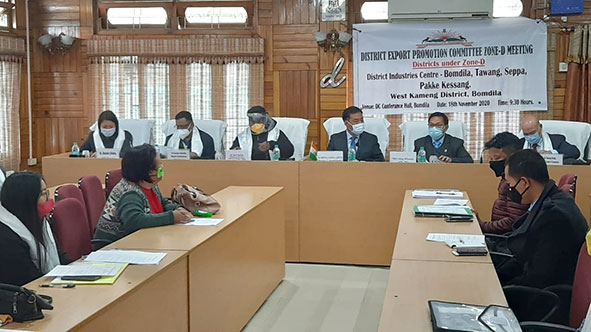 He urged the local entrepreneurs to give priority on the produces which have global market value.

Trade and Commerce Director Tokong Pertin said that the prime minister is personally monitoring and reviewing the programme, and asked for active participation of GMs to turn the districts into an export hub.

During the meeting, all the GMs stressed on the unavailability of proper market to sell the local produces, including tea, oranges, cardamom, etc. They opined that involvement of middle man by buying the products at low rates discourage the producers.

West Kameng Deputy Commissioner Karma Leki highlighted the potentials of West Kameng district in production of apple, persimmon, walnut, organic rajma, red rice etc, which he opined, could be exported from the district, if proper support and knowledge is disseminated to the local producers.

Among others, DCs of West Kameng, East Kameng, Pakke-Kessang and Tawang attended the meeting. (DIPRO)