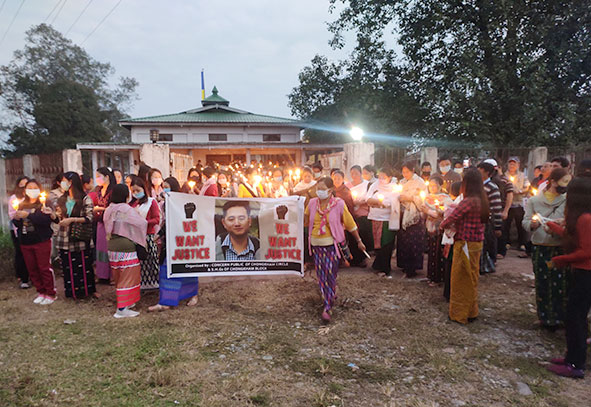 CHONGKHAM, Nov 19: A silent candlelight march was taken out by the women here in Namsai district on Thursday to demand justice for Sangam Namchoom, son of retired ACP Chow Jenia Namchoom, who was allegedly killed by his friends on the night of 14 November while he was returning from a picnic near the Digaru bridge.

Six persons have been arrested till now, including one Yangkhu Thoyang, the person who was driving the car which hit Namchoom, and Thoyang’s sister Nyuatan Thoyang, who was allegedly the girlfriend of the deceased. A police constable has also been detained for ‘concealment of evidence’ as he is said to have witnessed the alleged hit-and-run.

Sources informed that an altercation broke out at the picnic spot and Nyuatan took away Namchoom’s motorcycle key, after which he (Namchoom) proceeded towards Chongkham on foot.

The police constable is said to have ridden the bike and followed Namchoom and met him about 1 kilometre from the Alubari bridge when the Swift car purportedly hit him.

After hitting Namchoom, the car reportedly drove away, while the others did not inform the police, friends or the family of the deceased. It was a passerby going to Tezu who reported the matter to the police personnel manning the check gate at the Digaru junction, who further informed the Sunpura police station. The time of occurrence is said to be between 9:30 pm and 10 pm.

The Sunpura police, led by Inspector Dumai Singpho, reportedly arrived at the crime scene at around 4 am on the morning of 15 November, and after recovering the deceased’s mobile phone made contacts and identified the deceased at around 8 am.

The Swift car has been seized by the Chongkham police as the father of the main accused is an employee at the CHC here.

Sources in the police revealed that they are investigating the “motive and the conspiracy angle” of the case.

More than a thousand persons from all walks of life took part in the candlelight march, which started from the Buddhist temple and culminated at the trijunction here.

A two-minute silence was observed before the crowd dispersed.

Giving a brief speech, Chow Kungmet Namchoom, a cousin of the deceased, termed the incident “a pure case of murder” and said that an SIT investigation would be sought to bring out the facts. The arrest of a police constable in the case is giving more impetus to the demand for an SIT investigation.