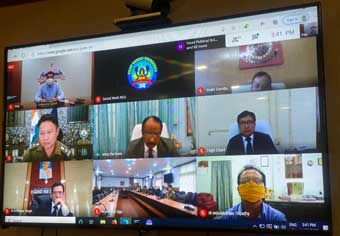 Speaking during an online national symposium on ‘Justice delivery mechanism in India: Existing concerns and evolving dimensions’, organized by Rajiv Gandhi University’s (RGU) social work department on Thursday, Khandu observed that people knock the doors of the court for justice, but at times there are people who are out to exploit the judicial system.

“Such people, for their vested interests, take recourse to court proceedings and try to stall public interest, public administration, official discipline and conduct of government business. Most of the time, they succeed in their malicious design that hamper developmental works and cause huge loss to the state exchequer,” he said, and appealed to the state’s legal luminaries to discuss it and suggest ways to defeat such designs.

Lauding RGU for organizing the symposium to commemorate the Constitution Day, Khandu pointed out that the founders of the constitution prepared a futuristic, dynamic, holistic and vibrant document that reflects the ideals and aspirations of the country on one hand and protects the future of all Indians on the other.

“To secure justice and strengthen the justice delivery mechanism, three major institutions – police, courts and prisons – need to act impartially and should demonstrate reasonableness in decision-making. These three institutions form the three pillars on which justice is delivered in our country,” he said, and assured to support the courts and make policing robust and transparent.

“Let me assure you through this e-symposium that no criminal will go unpunished. It is my standing instruction to the state police that no innocent person should be harassed and no criminal should be let off under any influence whatsoever,” he informed.

Stressing on the importance of creating awareness on fundamental duties and fundamental rights, the CM said there is need for regular capacity building, training, etc, for law enforcement agencies, and for strengthening the public grievances mechanism for speedy and efficient justice delivery.

“On this Constitution Day, let us all pledge to respect the rule of law and continue to look at our constitution as the guiding light of our democratic governance,” he said.

Besides state government officials, including the chief secretary and the DGP, RGU faculty members and students, deputy commissioners and superintendents of police attended the symposium virtually.

Joining the nation in observing the Constitution Day, the political science department of Rajiv Gandhi University (RGU), in collaboration with RGU’s Institute of Distance Education organized a talk on ‘Celebrating India’s plurality: The essence of India’s constitution’ by Prof Madhurendra Kumar from Kumaun University through virtual platform.

“The preamble to the constitution reflects the ideals and vision of the constitution makers,” Kumar said while speaking on the significance of socialism and secularism in a pluralistic society like India.

“The day need not be taken as a mere formality; rather, it needs to be considered as an occasion to evaluate the performance of our constitution and democratic institutions,” Prof Kumar said.

Earlier, RGU Vice Chancellor Prof Saket Kushwaha read out the preamble to the constitution, and urged the citizens of the country to “balance the rights and responsibilities and duties in the interest of the nation.”

The Constitution Day was also observed by the NSS unit of the Vivekananda Kendra Vidyalaya (VKV), Itanagar.

APSLSA Member Secretary Jaweplu Chai in her address enlightened the participants on the historical development of the judiciary in Arunachal. She also read out the preamble to the constitution.

JGGLC Principal Mizum Nyodu sensitized the students to the history of how the constitution of India came into force in 1950. Nyodu also sensitized the participants to their fundamental rights and duties and the directive principles.

DIPRO adds: The North East Frontier Technical University (NEFTU) in West Siang HQ Aalo observed the Constitution Day at the university’s auditorium on Thursday, in synchronization with the prime minister’s reading out of the preamble to the constitution of India.

The reading out of the constitution ceremony was initiated by Soumyadeep Chakrabarti, faculty of law, in chorus with all the teaching and non-teaching staffs.

The college’s academics dean Dr Partha S Rakshit spoke about the importance of the constitutional rights and freedoms that the citizens of the country enjoy, while NEFTU assistant registrar Robin Singh dwelt on the uses of laws in day-to-day life. (With input from CM’s PR Cell)